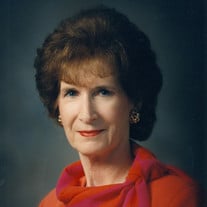 Memorial services for Alice Murl Kidd, 85, of Chandler will be held on Saturday, December 21, 2019 at 11:00 a.m. at First United Methodist Church in Chandler, where she was a life long member. Dr. Stan Copeland and Rev. Brian Harkness will be officiating. A private family burial will be held in Chandler Cemetery under the direction of Stewart Family Funeral Home. Alice Kidd went to be with her Lord and Savior, Jesus Christ on Sunday, December 16, 2019. She was born on December 3, 1934 in Chandler to Luster and Nettie Murl Cade. After graduating from Chandler High School, Alice attended Federal Institute in Tyler. On December 18, 1954 she married the love of her life, Jerry Kidd from Brownsboro. A few of Alice Murl’s favorite past times included traveling, garden club and playing bridge, where she earned the rank of Life Master. In her later years she loved going to the Dallas Maverick games with some of her life long friends. The most precious thing to Alice was her grandchildren and she bragged about them every chance that she had. Alice Murl was involved in and supported many different community organizations and charities throughout her life. Anyone that knew her well, knew about the generous spirit she displaced toward others during her lifetime. On behalf of our family, we want to especially thank Nancy Bertholf, Charles and Eleynor Boker and many others who visited her faithfully for these past years. We would also like to give a very special thanks to Anne Zimbelman, for the love and care she demonstrated to Alice during the years of her illness. Alice was preceded in death by her parents, Luster and Nettie Murl Cade; husband of 56 years, Jerry Kidd; brothers, Jack and Eugene “Bud” Cade. She is survived by sons, Luster Kidd of Tyler, Greg Kidd and wife Shelly of Plano; grandchildren, Kristi and husband Levi Hughes, Layne, Jack and Alice of Sachse, Chad Kidd and wife Holly and Keller of Tyler, Ashley, husband Rory Conley and Ross and Joy Conley of New Caney, Chelsea Kidd of Kingwood. Honorary pallbearers will be Mac Hutchens, David Monk, David Kidd, David Angel, Gerald Garrie, Larry Epperson, Alberto Romo, Casimiro Adrian Gutierrez, Rack Tindel, Don Copeland, Bill McHam, Conley Cade and Ras Cade. In lieu of flowers, memorials made be made in Alice Murl Kidd’s honor to First United Methodist Church in Chandler, P. O. Box 69, Chandler, TX 75758; or the Chandler Cemetery Association, P. O. Box 1822, Chandler, TX 75758.

Memorial services for Alice Murl Kidd, 85, of Chandler will be held on Saturday, December 21, 2019 at 11:00 a.m. at First United Methodist Church in Chandler, where she was a life long member. Dr. Stan Copeland and Rev. Brian Harkness will... View Obituary & Service Information

The family of Alice Murl Kidd created this Life Tributes page to make it easy to share your memories.

Memorial services for Alice Murl Kidd, 85, of Chandler will be...

Send flowers to the Kidd family.