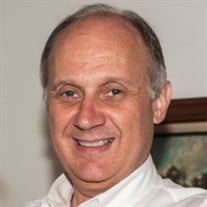 Andrew Layne Leath, 66, went to be with the Lord on January 9, 2021. Andy was born to Robert O. Leath and Gretchen (Ford) Leath on September 8, 1954 in Tyler, Texas and lived there most of his life. He was proud of being a seventh-generation Texan. He attended Bell and Birdwell Elementary Schools, Hubbard Junior High and graduated from Robert E. Lee High School in 1973. He graduated from Texas A&M University with a degree in Engineering and worked in Quality Control for Carrier, Rex-Hide, and General Dynamics where he recently retired. Andy had a lifelong love for history and returned to receive his Masters in History from Stephen F. Austin State University. He was an active member of the Smith County Historical Society and East Texas Historical Society. He served as an officer in both groups and regularly contributed articles and presentations. He did extensive research on his family genealogy and collaborated on numerous family books. He enjoyed meeting and keeping up with family all over the country. Andy also loved music and in his 30s, he shared his beautiful voice with the Reach Out Singers that toured churches in the midwestern United States and Europe. He was also in choirs and worship groups at Grace Community Church and Green Acres Baptist Church. Andy was preceded in death by his father and is survived by his mother and siblings, Roxanne Kasiraj (Chander) of Spring, Texas, Randy Leath (Karen) of Abilene, Texas and James Leath (Melanie) of Tyler. He poured a lot of time and love into his nieces and nephews who will miss him greatly: Emily, Adam (Ashley), Rebecca, Alyssa (Daniel), Renee, Catherine, Joanna, Aimee (Matt) and Virginia. Graveside service will be held Friday, January 15, 2021 at 2 p.m. at Pine Springs Cemetery with Chaplain Elwood Stetson officiating under the direction of Stewart Family Funeral Home.

Andrew Layne Leath, 66, went to be with the Lord on January 9, 2021. Andy was born to Robert O. Leath and Gretchen (Ford) Leath on September 8, 1954 in Tyler, Texas and lived there most of his life. He was proud of being a seventh-generation... View Obituary & Service Information

The family of Andrew Layne Leath created this Life Tributes page to make it easy to share your memories.

Send flowers to the Leath family.