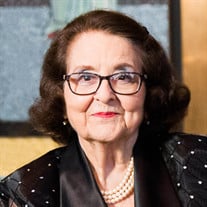 Angel Kotsiones Saleh of Tyler, Texas, flew on the wings of the angels to heaven on October 13, 2019, to be reunited with her true love, J. J. “Snooky”, her husband of over 50 years. She was born on August 13, 1924, to Nicholas and Mary Kotsiones in Greenville, Texas, and at the age of 1 the family moved to Dallas. She met Snooky at a Catholic Youth Organization dance between St. Patrick’s Cathedral Dallas and Immaculate Conception Tyler. They married on May 20, 1951. She is preceded in death by loving family members; her husband J.J. Snooky Saleh, her father and mother Nicholas and Mary (Ashmore) Kotsiones, her sister Olga Danna, and grandson-in-law Kevin Speier. She is survived by her three children, Gerald, Beverly, Daniel and wife Denise; her grandchildren, Angelina Speier, Dr. Mary Rose Mamey, Dn. Nicholas Mamey (Christina), Elizabeth Chown (Michael), Simon Saleh (Autumn), and Evan Saleh. Angel is also survived by her three great-grandchildren, Jase and Alina Speier, and Katherine Mamey and by several nieces, nephews, and cousins. Angel’s greatest joys were traveling, visiting with her grandchildren and great-grandchildren, and cooking. She traveled the world with Snooky. Some of her most memorable trips were flying to Paris on the Concord, Greece where she visited her dad’s home and Church, and Thailand where they were invited to a private tour of the Grand Palace by the crowned Prince. Angel was recognized throughout the city as a volunteer at Christus Mother Frances Hospital for over 55 years and over 14,000 hours of service. She worked in different departments and capacities with the Auxiliary. Her proudest accomplishment was starting the ICU Waiting Room and Surgery Waiting Room manned by volunteers in the late 1970’s. Years later, Snooky dedicated the new Saleh Surgery Waiting Room in her honor unbeknownst to her. Even in the months before she passed, you could find her in the waiting room every Wednesday at her desk. She was known for handing out strawberry candies which the doctors, nurses and employees looked forward to every time they saw her. Throughout her life she received many awards and honors; the one she treasured the most was being honored by the Pope for her charitable work and contributions to the Catholic church. Angel and her children started the Saleh Family Foundation which donates to several Churches, Colleges, Hospitals and Charities throughout the United States. Rosary is Sunday, October 20, at 4:00 pm followed by Visitation from 4:30-6:30 pm at Stewart Funeral Home Tyler. Funeral Mass is Monday, October 21, at 10 am at Cathedral of the Immaculate Conception Tyler followed by the burial at Rose Hill Cemetery Tyler. A Meal of Mercy will be served at the Cathedral following the burial. In lieu of flowers contributions could be made to: Christus Mother Frances Hospital Foundation, 100 East Ferguson Street, Suite 800, Tyler, Texas, 75702; Cedars of Lebanon Tyler, P. O. Box 6124, Tyler, Texas, 75711; and Cathedral of the Immaculate Conception, 423 South Broadway Avenue, Tyler, Texas, 75702.

The family of Angel Saleh created this Life Tributes page to make it easy to share your memories.

Angel Kotsiones Saleh of Tyler, Texas, flew on the wings of the...

Send flowers to the Saleh family.