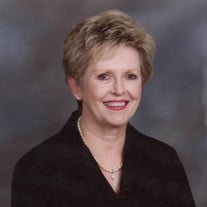 Services for B. Ann Taylor Starnes, 80, of Bullard will be held on Saturday, June 12, 2021, at 2:00 p.m. at Stewart Family Funeral Home with Rev. Katherine Scott officiating. Burial will follow at Harris Creek Cemetery near Winona under the direction of Stewart Family Funeral Home. Mrs. Ann Starnes was called home to be with the Lord Saturday, June 5, 2021, in Tyler after a lengthy illness. She was born August 2, 1940, in Longview to Don R. and Flora Jones Taylor. Ann graduated from the Medical Center Hospital School of X-Ray Technology in 1960 and returned to school later in life to become a Registered Radiation Therapist. She was a member of Beta Sigma Phi and was very active in her community throughout her life. In 1970, she was asked to be a delegate for Texas A&M at American’s for Freedom and that experience triggered a lifetime of service to her community. From leading the PTA at her son’s school, she went on to serve as President of Tyler ISD Council PTA. In 1985, the Texas PTA awarded her an Honorary Life Membership in recognition of Distinguished Service Given to Children & Youth. Ann served as the President of the Smith County Counsel on Alcoholism & Drug Abuse in the late 80s and was active in American Business Women’s Association, where she was ultimately recognized by being named ABWA Women of the Year. Ann was honored to be a participant in Leadership Tyler Class 1 in 1986. Mrs. Starnes was active in the East Texas Counsel of Governments and the United Way of Greater Tyler, where she served as a Loaned Executive in 1988. She was a member of Saint Paul United Methodist Church of Tyler, where she was active in the Wonderful Wednesday after school program for kids. From helping treat radiologic patients across the country, to service to her community and children, she made it her life’s work to help others. Over her life, she hosted a Thanksgiving family reunion every year since 1979. It is estimated she prepared and served more than 1,300 thanksgiving meals for her extended family. Ann was preceded in death by her father, mother, and younger sister Martha Simenec. She is survived by her husband Ken W. Starnes; sons, Don W. Starnes and his wife Becky of San Antonio and David T. Starnes of Denver, CO; her sister Jane and her husband John Aggen of South Holland, Il; as well as her grandson Jordon Joseph Greer of Fort Carson, CO, and many cousins. Pallbearers will be Glenn Jones, Marshall Webb, Jerry Whitworth, Mark Frazier, and Chris Stanbery. Honorary pallbearers will be John Aggen and grandson US Army PVT Jordon J. Greer. Visitation is scheduled from 1:00 - 2:00 p.m. on Saturday, June 12, 2021, at Stewart Family Funeral Home, 7525 Old Jacksonville Highway, in Tyler. If desired, memorials may be made to St Paul United Methodist Women, 215 S. Clayton Ave., Tyler, TX 75702.

Services for B. Ann Taylor Starnes, 80, of Bullard will be held on Saturday, June 12, 2021, at 2:00 p.m. at Stewart Family Funeral Home with Rev. Katherine Scott officiating. Burial will follow at Harris Creek Cemetery near Winona under the... View Obituary & Service Information

The family of Ann Taylor Starnes created this Life Tributes page to make it easy to share your memories.

Services for B. Ann Taylor Starnes, 80, of Bullard will be held...

Send flowers to the Starnes family.