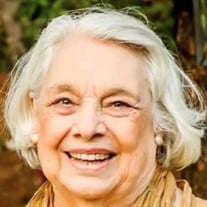 Annie Joyce “Dot” Bottoms Hodge was born on May 3, 1932, on the family farm in Navarro, Texas in an old barn her parents had made into their family home. She went to school at Mildred ISD there in Navarro County. It was there that she met the love of her life James C. “Jay” Hodge. Soon after she graduated, they married on the same family farm on September 9, 1950. It was not long into their marriage before they had their first son, James “Jim” Jr and moved to Tyler. Jay went to work for Southwestern Bell Telephone company in Tyler and Dot took care of the young family. They got involved quickly at Queen Street Baptist Church (Westwood) in Tyler. Jay and Dot had their second child, Gary, in 1954. It was not long after she became involved with the Children’s ministry there at Queen Street. You see, Dot absolutely loved children and they loved her. In 1963, Jay and Dot had a pleasant little surprise come along with their third son, Ken or “Precious” as his mother nicknamed him. Around 1970 they moved their membership over to First Baptist Church in downtown Tyler. Once again, Dot immediately was involved with the Children’s ministry. Between Queen Street and First Baptist, Dot expressed her love for children through teaching in Sunday School some forty plus years. In 1965 the couple would begin a new “adventure” (Dot loved a good adventure) as they would start East Texas Alarm as a small side business with Jay working in the field at night and on weekends, while Dot ran the office from their home. In 1971, Jay was able to retire from Southwestern Bell because the alarm company was doing so well. The couple continued to run the small business out of their home until 1980 when they built a new building at its current location. As the business grew, so did the family, as both Jim and Gary would marry and have children of their own. These grandchildren became the apple of Dot’s eye as she invested time and most of all, love, into each one of their lives! From this point on Dot would officially be known as “Momma Dot” by her children, her grandchildren, the friends of her grandchildren, and her great- grandchildren. Often, these grandchildren would spend the night at Momma Dot’s house. They sometimes would feel the need to call home to their parents “telling” on Momma Dot for some slightly off color language Momma Dot may or may not have used. After all, they would all affectionately come to be known as her “little [email protected]*!” at some point in time. Tragedy struck the family in 1986 when Jay died after a yearlong battle with cancer, ending their 36-year marriage. Momma Dot was blessed with her fifth grandchild only a few months after Jay passed to help move past the mourning. And not too long after Ken would marry, and Momma Dot would have her sixth and final grandchild to love. Momma Dot was always involved in her grandchildren’s lives, rarely missing a basketball game, golf tournament, or tennis match. She was always making costumes for them for Halloween and school performances. Momma Dot would retire from East Texas Alarm and leave the running of the business to her three sons. As she continued to teach children in Sunday School, she also started playing tournament bridge. Momma Dot loved to play games, and this game would be the one she would cherish for the rest of her life. Momma Dot loved her family so much, hosting countless numbers of Christmas Eves and Thanksgivings at her home over the years. But as much as she loved her family, she loved her savior more. After 90 years, and 36 years after losing Jay, God allowed Momma Dot to come to her eternal home and see her precious Jay once again on June 12, 2022, at Hospice of East Texas in Tyler, Texas. She was preceded in death by her husband James C. “Jay” Hodge. She was also proceeded in death by her parents, Vincent and Jennie Bottoms of Navarro. She is survived by her three sons and their wives, Jim & Teresa Hodge of Tyler, Gary and Kelly Hodge of Tyler, and Ken and Lucia Hodge of Tyler. Also, her nine grandchildren (and spouses), Casey Hodge of Austin, Taylor and Matt Green of Austin, Cathy Hodge of Austin, Clay and Courtney Hodge of Tyler, Carly and Thomas Robinson of Austin, Megan and Hunter Page of Tyler, Tiffany and Brandon LaRoux of Keller, Bianca Capodieci of Tyler, and William Capodieci of L’Assomption, Quebec. She is also survived by her two brothers, Monty “Bunk” and JoAnn Bottoms of Eureka, Texas, and Lynn and Karen Bottoms of Navarro, Texas. Also, her daughters-in-law, Carol Hodge of Tyler, and Diane Hodge Horton of Tyler. And finally, her beloved twelve great- grandchildren! There will be a private graveside service for family on Wednesday, June 15th at 9:30AM. The funeral service will be at Stewart Family Funeral Home at 7525 Old Jacksonville Hwy, Tyler, Texas at 10:30AM on Wednesday, June 15th. There will be a visitation for family and friends immediately following the funeral. Pallbearers for the funeral are Casey Hodge, Clay Hodge, Matt Green, Thomas Robinson, and Hunter Page. The family invites you to make donations to Hospice of East Texas in lieu of flowers, 4111 University Blvd., Tyler, TX 75701 (www.hospiceofeasttexas.org).

Annie Joyce &#8220;Dot&#8221; Bottoms Hodge was born on May 3, 1932, on the family farm in Navarro, Texas in an old barn her parents had made into their family home. She went to school at Mildred ISD there in Navarro County. It was there that... View Obituary & Service Information

The family of Annie Joyce "Dot" Bottoms Hodge created this Life Tributes page to make it easy to share your memories.