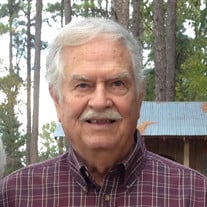 Arless F. Wilson, until recently a lifelong resident of Tyler, Texas, passed away on October 23, 2021, in Oklahoma City, Oklahoma. He was born to John Henry Wilson and Edna Labe Carpenter Wilson on December 9, 1933, in Hot Springs, Arkansas. He graduated from Marshall (Texas) High School and received a Bachelor’s degree from Bethany Nazarene College, now Southern Nazarene University, in Bethany, Oklahoma. It was there that he met and later married his beloved, Zella Glidden in 1956, and together they had three sons: Dr. John Mark Wilson, Dr. Walter Bradley Wilson and Douglas Brian Wilson. Arless and Zella moved to Corpus Christi, Texas, where they began their teaching careers, but he was soon drafted to the U.S. Army and they moved to El Paso, Texas. After his honorable discharge from the army, Arless was recruited to a sixth grade teaching position at Dixie Elementary School in Tyler. In 1967, he became School Principal at Dixie until his retirement. Arless was loved and respected in the school system. He received many awards and honors for his leadership and innovative educational programs, which were replicated in other programs locally and statewide. After his retirement from TISD, he joined Tyler’s Caldwell Zoo in the Education Department and served as the director of education. He deeply enjoyed interacting with visiting school groups. Teaching remained a passion throughout his life. Arless always loved his farm and his family, and he particularly loved having them both together. Many holidays saw the house at the farm packed and overflowing with family from out of town and with their son’s college friends. He always had a garden and enjoyed sharing with friends the abundance of what he harvested. No doubt he gave away more than his family ever consumed. He found peace and tranquility in nature and being outdoors. He would often sit and watch birds. He could tell you what bird was around, just by the bird’s call. He also enjoyed sports at all levels. He especially liked the Texas Rangers and, for that matter, anything Texas. Arless was a faithful disciple of Christ by upbringing and by personal commitment. He was an active leader in local and district church ministry his entire adult life. In Tyler, he was, in succession, a member of Grace Church of the Nazarene, Lakeview Church of the Nazarene, First Church of the Nazarene, and lastly, Hilltop Church of the Nazarene. He was instrumental in the procurement of property and the establishment of the Iglesia del Nazareno in Tyler. His impact, through this service to his Lord, was significant to all he came in contact with and he made many dearly loved lifelong friends. For many years he served his churches in the role of Sunday School Superintendent, Board Member, and Choir Member. In addition, he served on countless district boards and committees. He also served as a Board of Trustees member for his alma mater, Bethany Nazarene College. Most importantly, Arless Wilson was a man that loved the Lord. Arless was preceded in death by parents, John Henry and Edna Wilson; his beloved wife, Zella Wilson; son, Dr. Brad Wilson; brother and wife, John Henry, Jr. (Pete) and Betty Wilson; sister and husband, Odell and Vern Ebling; and brother, Virgil Wilson. In 2011, he married Phyllis Wade Stamps, who survives him. Arless is also survived by son and wife, Dr. Mark and Beth Wilson; son and wife, Doug and Carol Wilson; stepson and wife, Randy and Candice Stamps; stepson, Robert Cobb; stepdaughter, Lisa Young. He also left 20 grandchildren: Emily Harpster, Scott Wilson, Josh Wilson, Andy Wilson, Morgan Wilson, Brian Wilson, Jordan Wilson, Brooke Cullen, Bryce Wright, Monica Haskins, Shae Young, Lindsey Coupe, Jessica Cobb, Tiffany Fields, Jennifer Cobb, Elijah Phillips, Ronin Stamps, Isaiah Phillips, Levi Stamps, and Raven Stamps; as well as a host of great-grandchildren, cousins, nieces and nephews.

The family of Arless Wilson created this Life Tributes page to make it easy to share your memories.

Arless F. Wilson, until recently a lifelong resident of Tyler,...

Send flowers to the Wilson family.