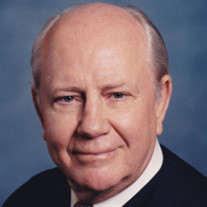 Judge Arthur Roby Hadden, Sr., 91, passed away peacefully and went to be with his Lord and Savior on Monday, July 20, 2020. A graveside service will be held on Monday, July 27, 2020, at 9:30 a.m. at Rose Hill Cemetery in Tyler, with Pastor Shane Barnes of Grace Community Church officiating, under the direction of Stewart Family Funeral Home. Roby was born February 13, 1929, in San Antonio, Texas, the youngest of eight children, to Will Alexander Hadden and Kathleen Cranston Westerman. One year later, the family moved to Fort Stockton, Texas, where they were ever-present members of the First Presbyterian Church, and where his father practiced law for over 50 years and his mother ran a bookstore in the historic building known as the Grey Mule Saloon. Growing up in West Texas, Roby developed strong family values, a deep love for the outdoors, and lifelong friendships. As a youth he spent his days swimming, riding his bike, going to church, catching horny toads, and exploring the vast West Texas mesas near his home. On Sundays and throughout the summer, the family would travel to see his grandparents in nearby Balmorhea where he would fish, swim, and take naps on the porch. Roby graduated from Fort Stockton High School in 1947 where he was a four-year letterman in three sports, played tenor saxophone, and was the senior class president. After a year at the Schreiner Institute in Kerrville, he attended the University of Texas at Austin, receiving his BBA degree in 1952. During the Korean War he served in the United States Air Force for two years on active duty and three years on reserve status, attaining the rank of Captain. He returned to the University of Texas and graduated from the School of Law in 1957, receiving his law degree and law license. While in law school he met and married the love of his life, Marellyn Denton, of Waco. Soon after, Roby accepted a position at the Ramey law firm in Tyler, beginning 51 years in the legal profession. In 1969 he was appointed U.S. Attorney for the Eastern District of Texas, serving in this position until 1977. He then maintained a private practice until his 1994 election to the Texas Twelfth Court of Appeals, serving as justice for 6 years. Thereafter, he served as visiting judge on the Fifth Court of Appeals in Dallas and the Seventh Court of Appeals in Texarkana. He later became a contract attorney in the Wilson Law Firm of Tyler and retired in 2008. Roby was involved in many civic and legal organizations in Tyler, including past president of the Smith County Bar Association. Roby and Marellyn raised four children in Tyler, instilling in them the same core Christian values taught by their parents. They were founding members of Grace Community Church of Tyler, remaining active for over fifty years. Leading and participating in Bible study groups and ministries kept them focused on God’s promise for their lives. He was a proud “Poppa” to 12 grandchildren and 3 great-grandchildren, whom he adored. He loved playing games, cooking pancakes, riding in the Jeep, fishing, and hiking with them all, and was always ready to share the wisdom gained from his life experiences. Roby’s favorite outdoor activities included jogging, snow skiing, boating, swimming, and tennis. Roby loved to travel with Marellyn, and their favorite vacation spot was YMCA of the Rockies in Estes Park, Colorado, where they thrived in the company of family and the fellowship of many friends during extended summer-time stays. Roby especially looked forward to hiking, picnicking, wildlife viewing, and worshipping in the Rocky Mountain National Park with his wife, children, grandchildren, and friends. Shortly after Marellyn’s passing in 2015, Roby moved to Rambling Oaks Courtyard in Highland Village, Texas, to be near family. He developed close friendships in his new community, and he would gladly hand out free advice and encouragement, and share the word of God. During these years he treasured the visits from his children and their families. Outings were particularly welcome, including trips on the train through central Texas. In 2019 he completed a bucket list item by visiting his childhood home in Fort Stockton with his three children. Seeing the familiar sites sparked wonderful memories of his parents and siblings and his carefree youth experiences. Roby was preceded in death by his loving wife and sweetie of 59 years, Marellyn, and by his eldest son, Neilson Denton Hadden. Survivors include his children and their spouses; daughter, Lynne Hadden Clarke (James) of Mansfield, Texas, son, Robert Wesley Hadden (Laura) of Highland Village, Texas, son, Arthur Roby Hadden, Jr. (Lisa), of Mexia, Texas; daughter-in-law Sharyl Seyler (Chuck) of Cypress, Texas; grandchildren and spouses, Lindsey Hadden Sandefur (Justin) of Austin, Texas, Denton Alexander Hadden and Holly Kathleen Hadden of Cypress, Texas, Russell James Clarke and Kevin Gene Clarke of Mansfield, Texas, Elizabeth Hadden Cullnane (Chris) of Denton, Texas, Hailey Lynne Hadden of Austin, Texas, Hannah Julianne Hadden of Highland Village, Texas, Blake Ellice Hadden and Alyssa Lynne Hadden of Mexia, Texas, Carey Seyler and Cody Seyler of Cypress, Texas; great-grandchildren, Norah Jane Sandefur, Elias Michael Sandefur, and Abel Neilson Sandefur of Austin, Texas; and numerous nieces, nephews and cousins. Roby was deeply loved and admired by all of his family, and his laugh and wisdom will be greatly missed. His abiding faith and sense of humor endured through his last days, and his devotion and love for his family will never be forgotten. The family wishes to thank the staff at Rambling Oaks Courtyard, for their love, support, patience, and diligent care the last four and half years. Memorial gifts may be made to Grace Community Church of Tyler, 3215 Old Jacksonville Road, Tyler, Texas, 75701; YMCA of the Rockies, 2515 Tunnel Road, Estes Park, Colorado 80511; or to the charity of one’s choice. “Trust in the Lord with all thine heart, and lean not unto thine own understanding. In all thy ways acknowledge him, and he shall direct thy paths.” - Proverbs 3:5,6

Judge Arthur Roby Hadden, Sr., 91, passed away peacefully and went to be with his Lord and Savior on Monday, July 20, 2020. A graveside service will be held on Monday, July 27, 2020, at 9:30 a.m. at Rose Hill Cemetery in Tyler, with Pastor Shane... View Obituary & Service Information

Send flowers to the Hadden family.