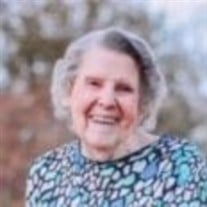 On Monday August 31, 2020, Audrey Ann Helman, devoted wife and mother, passed away into eternity. She was preceded in death by her husband, Rowland J. “Bink” Helman and survived by her brother and his spouse, Henry G. and Patricia Bergeron of Marshall and all four of her children and their spouses, Stephen Jody Helman and Gail, Kathryn Denise Ballinger and Phil, Rowland Gayman Helman and Mary-Alice, and Carol Lynn Helman. Audrey has nine grandchildren, five great grandchildren, and a handful of nephews and nieces. Audrey was born to Mollie Manora (Nora) Bergeron on December 18, 1927 in New Orleans, Louisiana. She moved to Houston in 1930 where she and her mother and brother lived with Nora’s sister Annie Eudora Carson and her husband Lloyd. During that period in Houston, Audrey’s mom married Jodie Frank Chapman. Audrey graduated from Milby High School and attended nursing school at Herman Hospital where she met Bink. They were married on June 5, 1948 and settled in Houston raising four children. Audrey worked part time in nursing and helped out at Bink’s office. They relocated to Austin after Bink’s retirement from medical practice in 1988. They were married for 45 years until Bink’s death in 1993. In 2017, Audrey moved to Tyler where she spent the final years of her life close to family. Audrey was fiercely loyal to her family whom she served faithfully until her death. She had so many wonderful qualities that her children and their spouses will always remember her for including her kindness to everyone, her servant heart, the magic she worked in the kitchen with food, her generosity, her unconditional love and supportive nurturing, placing her family including her kid’s spouses first, her almost infinite patience to allow her kids to keep and raise almost any kind of an animal domesticated or wild, and her enjoyment of the simple pleasures of recreational games. She had an amazing ability as an ornamental gardener and blessed many with it. Audrey will be greatly missed by her children, all of her extended family, and all who knew her.

On Monday August 31, 2020, Audrey Ann Helman, devoted wife and mother, passed away into eternity. She was preceded in death by her husband, Rowland J. &#8220;Bink&#8221; Helman and survived by her brother and his spouse, Henry G. and Patricia... View Obituary & Service Information

The family of Audrey Ann Helman created this Life Tributes page to make it easy to share your memories.

Send flowers to the Helman family.