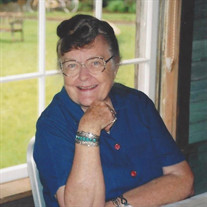 Graveside services for Avis Franke Halbert, 94, of Flint, TX will be held at 2:00 p.m. on Thursday, December 9, 2021 at the Kilgore City Cemetery with Rev. David Brasher from Bullard United Methodist Church officiating. A visitation will be held on Wednesday, December 8, 2021 from 5-7 pm at Stewart Family Funeral Home. Avis passed away in Flint, TX on December 3, 2021. She was born April 1, 1927 in Orange Field, TX to Lee Andrew and Mundina Kretzchmar Franke. Avis graduated from Kilgore High School in 1945. She attended Texas State College for Women in Denton and graduated from The University of Texas in Austin in 1949. She married Bill Halbert on June 5, 1951. They were married for 68 years. Avis was the epitome of an Air Force wife and traveled the world with Bill during his USAF career. They made lifelong friends at every base and Avis eagerly became a faithful volunteer. Whether it was serving as a docent at the Sophienburg Museum or offering newcomers assistance at the Air Force Base Family Services offices, she never met a stranger. Her Methodist Church Circle programs will be remembered by all who heard them. Together, Bill and Avis raised three daughters and always made sure their girls knew Texas was home. Upon Bill’s retirement, they settled in New Braunfels, TX. Avis also had a gift of words and was always quick to send a card of encouragement to her many friends. She was a true leader and inspiration to all who met her. Avis was preceded in death by her husband, Bill; her parents, Lee and Mundina Franke; and her sister, Ruby Lee Kilgore. She is survived by her three daughters, Mundina O’Driscoll and husband Danny of Batesburg, SC, Cindy Cisco and husband Rick of Baytown, TX, and Rebecca Mohr and husband David of Tyler, TX; grandchildren, Lori Alexander of Mont Belvieu, TX, Jill Moore and husband Jared of Huffman, TX, Colleen Morgan and husband Andrew of Batesburg, SC, Meredith Mohr of Houston, TX, Kate Pinkston and husband Michael of Nampa, ID, and Joseph Mohr of College Station, TX; and great-grandchildren, Kaley and Madison Alexander, Colt and Case Moore, and Audrey Pinkston. Pallbearers will be Rick Cisco, David Mohr, Joseph Mohr, Jared Moore, Cliff Halbert and Mike Garrett. Honorary Pallbearers will be Danny O’Driscoll, Andrew Morgan and Michael Pinkston. If desired, memorials may be made to Bullard United Methodist Church, 204 Rather St, Bullard, TX 75757 or to any children’s charity of your choice.

Graveside services for Avis Franke Halbert, 94, of Flint, TX will be held at 2:00 p.m. on Thursday, December 9, 2021 at the Kilgore City Cemetery with Rev. David Brasher from Bullard United Methodist Church officiating. A visitation will be... View Obituary & Service Information

The family of Avis Franke Halbert created this Life Tributes page to make it easy to share your memories.