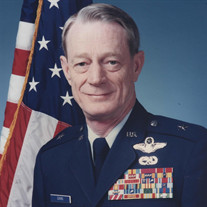 Brigadier General Benard Wayne Gann, age 80, returned to his Heavenly Father on November 20, 2020. Ben was a great American patriot, husband, father, grandfather, and brother. We weep at the loss and at the same time are grateful to God that such men lived. He was a true hero. Ben was born December 28, 1939 in Nacogdoches, Texas. He attended Center High School where he was an accomplished student and athlete. In 1962 he earned his BBA from Baylor University where he met his future wife, Genelle Amason of Corpus Christi. In 1963, he began his Air Force career. He attended Air Command and Staff College, Air War College, and received a master’s degree in Guidance and Counseling from Troy State University. He was an accomplished pilot and leader who accrued 6,000 flying hours. He served three tours of duty in Vietnam and Panama, commanded two combat bomb wings, and rose through the ranks to Brigadier General. Because of his courage and humility, he was admired and respected by those with whom he served. General Gann was awarded many commendations including the Bronze Star, the Legion of Merit, the Meritorious Service Medal, and the prestigious Defense Distinguished Service Medal. In 1995, Ben, Genelle and their family moved to Tyler, Texas, where he became a financial advisor. He was very involved in the community and in the church he loved, Marvin United Methodist. He is survived by his wife of 57 years, Genelle, their son Scott, granddaughters, Deven and Avery; son Mason, his fiancé, Doctor Angela Smith, twin grandsons, Miles and Matthew; daughter, Ashley Lowrance and husband, Jason, grandchildren, Wyatt, Everett and Catherine; his sister, Edwina Samford, nephews, Randall and Jeffrey, niece, Sherry Oliver and husband, Ben. General Gann will be buried with military honors at Dallas-Fort Worth National Cemetery with a private ceremony. A memorial service will be planned at a later date in Tyler, Texas. In lieu of flowers, donations may be made to the Eternal Flame Fund at Marvin UMC, 300 West Erwin St., Tyler, Texas 75702. “Oh, I have slipped the surly bonds of earth…I’ve trod the high untrespassed sanctity of space, put out my hand and touched the face of God.” From “High Flight” by John Gillespie Magee Jr.

Brigadier General Benard Wayne Gann, age 80, returned to his Heavenly Father on November 20, 2020. Ben was a great American patriot, husband, father, grandfather, and brother. We weep at the loss and at the same time are grateful to God that... View Obituary & Service Information

The family of Brig. Gen Benard Wayne Gann, U.S.A.F., Ret. created this Life Tributes page to make it easy to share your memories.