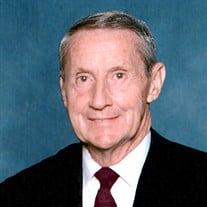 Graveside services for Bill R. Day, 84, of Tyler will be held on Saturday, January 25, 2020 at 11:00am at Rose Hill Cemetery in Tyler, with the Rev. Gerry Giles officiating. A visitation will be held on Friday, January 24 from 4-7pm at Stewart Family Funeral Home in Tyler. Bill passed away on January 21, 2020 in Tyler following his battle with cancer. He was born on July 12, 1935 in Tyler to William Leroy Day and Cleta Millington Day. His lifelong love of all things mechanical began when his father gave him a used motor when he was a boy. His father told him to take the motor apart and then put it back together, and he did. Bill graduated from Chapel Hill High School in 1952. In school, he excelled in both academics and athletics. He received numerous awards in various sports. Bill served two years in the U.S. Air Force and then several years in the Air Force Reserve. In September 1959, Bill married Martha Henry. They celebrated their 60th anniversary in 2019. Bill held various corporate jobs. In each job, he was promoted quickly because of his vast mechanical knowledge. He was known for his problem-solving abilities. He traveled across the U.S. to assist manufacturers and analyze production problems. In 1971, Bill left the corporate world to start his own business. He opened the AAMCO Transmission franchise in Tyler. As the business grew, he began to see an opportunity to sell tires. Bill decided to give up the franchise, move across the street on W. Erwin and open the first Bill Day Tire Center. With Bill’s business sense, an incredible staff and loyal customers, the business continued to grow to 4 locations. Bill won numerous awards for his creative and funny television commercials. He was one of the first dealers in the U.S. to advertise tires on television. The company will celebrate its 49th year in 2020. Bill was still active in the business with his family until his death. Bill loved auto racing and over the years, he owned several race cars. With his driver Doug Ingalls and crew, they won many races. While pursuing his hobby, he saw that other owners did not have easy access to racing parts and equipment. He opened Day Motorsports, a catalog company that supplied racing equipment around the world. The company remains in business today under different ownership. Bill enjoyed spending time with his family whether driving to Florida with their dune buggy in-tow, traveling to the Smoky Mountains, skiing or sporting events. He and Martha frequently traveled around the country in their motor home. He was so proud of his grandson William and loved to attend his many school and church events. Together, they enjoyed fishing, camping and working on William’s Pinewood Derby cars. Bill was a Christian. He was a member of Marvin United Methodist Church and attended regularly. Over the years, he supported various charities and helped numerous individuals in need. Bill was preceded in death by his parents, Leroy and Cleta Day and his daughter, Anita Day. He is survived by his wife of 60 years, Martha; daughter, Janet Day Sheffield (Bryan); daughter, Cindy Day; grandson, William Sheffield; several cousins and many loving friends. Honorary pallbearers will be the members of Bill’s 5 am Breakfast Group and the staff of Bill Day Tire Center. The family would like to express their sincere appreciation to the staff of MD Anderson Houston, along with Dr. Carla Wang-Kocik of Tyler, Dr. Marc Usrey of Tyler and the staff of Hospice of ET HomeCare. In lieu of flowers, the family requests that donations be made to The Hospice of East Texas Foundation, 4111 University Blvd., Tyler, Texas, 75701; The Salvation Army of Tyler, 633 N Broadway Ave, Tyler, TX 75702; Marvin United Methodist Church Missions, 300 W. Erwin, Tyler, TX 75702 or the charity of your choice.

Graveside services for Bill R. Day, 84, of Tyler will be held on Saturday, January 25, 2020 at 11:00am at Rose Hill Cemetery in Tyler, with the Rev. Gerry Giles officiating. A visitation will be held on Friday, January 24 from 4-7pm at Stewart... View Obituary & Service Information

The family of Bill R. Day created this Life Tributes page to make it easy to share your memories.

Graveside services for Bill R. Day, 84, of Tyler will be held...

Send flowers to the Day family.