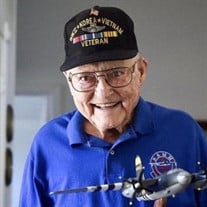 Services for Billy Gene “Bill” Halbert, 94, of Flint, Texas will be held on Saturday, February 29, 2020 at 2:00 p.m. at Bullard First United Methodist Church with Rev. David Brasher officiating. Burial will follow at the Kilgore City Cemetery. Bill Halbert died on February 24, 2020 in Flint. He was born to Minnie Belle Harris and Elzie Washington Halbert, Sr. on March 11, 1925 in Eastland, TX. He faced privation and difficulty growing up in the oil fields of Texas during the Great Depression. Hardship was met with tragedy when an accident took the life of Bill’s mother and two older brothers when he was just a child. With petroleum exploration surging in Texas during the 1930s, his father moved to wherever oilfield work was available – from the plains of West Texas at Crane and McCamey, to the East Texas oil boom in Kilgore – taking Bill and his brother, Elzie, Jr. along. Upon the outbreak of World War II, Bill volunteered to fight as soon as he was able. On his 18th birthday in 1943, he left high school before graduation to join the United States Army Air Corps. As a 19-year-old B-26 Marauder bomber pilot, he flew continuous combat missions over Italy, France, and Germany until the end of the war. Halbert returned to Kilgore after the war, earned his high school diploma, and enrolled at Kilgore Junior College. He excelled in sports, especially football and basketball. His football team competed in the inaugural Junior College Rose Bowl in Pasadena, CA in 1946. He went on to earn a Bachelor of Science degree in petroleum engineering at the University of Oklahoma. While there, he began dating and then married the love of his life for 69 years, Avis Dena Franke. They became the proud parents of three daughters, Mundina, Cindy and Rebecca. Having remained in the Air Force Reserve after World War II, Halbert was recalled to active duty at the onset of the Korean War. His assignments kept him in the U.S. during the war, where he was instrumental in training fighter pilots and anti-aircraft gunners. Eventually assigned to fly the F-86 Sabre and the F-100 Super Sabre fighter jets, he flew a number of missions in and around the Demilitarized Zone in Korea. Halbert supported combat operations during the Vietnam War as a mission planner, pilot, and forward air controller, completing more than 30 combat flight sorties against the Viet Cong in South Vietnam. Before his thirty-four years of military service were concluded, Halbert had served during three wars, had flown forty-two bomber missions over Europe, and numerous jet fighter operations in Korea and Vietnam. He also served worldwide during peacetime and received assignments as a Brigadier General’s aide-de-camp, an assistant for the Joint Chiefs of Staff at the Pentagon, and as Deputy Commander of Ellington Air Force Base in Houston, TX. Halbert also attended the National War College. In 1977, Bill retired from the Air Force as a lieutenant colonel, whereupon he began a new, full-time career as a professional golfer. Having been introduced to golf while serving as the aide to Major General Edward J. Timberlake, Halbert excelled in the sport during his Air Force years and eventually won several tournaments on the military circuit of competition. One of his notable victories was the U.S. Air Force Seniors Worldwide Golf Championship in 1974. Later as a civilian, Bill qualified as a PGA Golf Professional and for twenty-one years served as an Assistant Pro and Head Pro at several golf courses in the Austin and New Braunfels, Texas areas. In the 1980s, he competed in both the U.S. Senior Open and the PGA Senior Open, and competed with Arnold Palmer, Billy Casper, Gene Littler, and Sam Sneed. Though Bill’s life reflected many personal achievements, it also revealed a consistent investment in the lives of others. He has been a dedicated and loving husband and father, spending his time, energy and treasure on his most prized possession, his family. His life was punctuated with a myriad of volunteer roles such as PTA president, baseball coach, Sunday school teacher and elementary school tutor. As a PGA professional, he regularly donated his time and skills over many years to encourage young people to pursue and enjoy the game of golf. His activities were comprised of countless charity events and youth golf clinics. He was an instructor and mentor for current PGA golf professional Jimmy Walker while in his youth. Up until his final days he served as a docent for the Historic Aviation Memorial Museum in Tyler, and as a public speaker and mentor to many. Simply stated, Bill Halbert’s life, both public and private, has been dedicated to the benefit and well-being of others. Bill was preceded in death by his mother, Minnie Harris Halbert of Eastland, TX; father, E. W. Halbert, Sr. of Kilgore, TX; brothers, Clifton Halbert and Elbert Halbert of Eastland, E. W. Halbert, Jr. of Kilgore; and sister, Janie Sennikoff of Quitman, TX. He is survived by his wife, Avis Franke Halbert of Flint, TX; children, Mundina O’Driscoll and husband Danny of Batesburg, SC, Cindy Cisco and husband Rick of Baytown, TX, and Rebecca Mohr and husband David of Tyler, TX; grandchildren, Colleen Morgan and husband Andrew of Batesburg, SC, Lori Alexander of Baytown, TX, Jill Moore and husband Jared of Huffman, TX, Meredith Mohr of Houston, TX, Kate Pinkston and husband Michael of Norfolk, VA, and Joseph Mohr of Tyler; great-grandchildren Kaley and Madison Alexander, Colt and Case Moore, and Audrey Pinkston. Pallbearers will be David Mohr, Rick Cisco, Joseph Mohr, and Cliff Halbert. Honorary pallbearers will be Danny O’Driscoll, Andrew Morgan, Jared Moore and Michael Pinkston. Visitation will be from 5:00 – 7:00 p.m. on February 28, 2020 at Stewart Family Funeral Home, 7525 Old Jacksonville Highway in Tyler. If desired, memorials may be made to the Children’s Advocacy Center of Smith County, 2210 Frankston Hwy., Tyler, TX 75701, or any charity of your choice that supports child welfare.

The family of Bill G. Halbert created this Life Tributes page to make it easy to share your memories.

Services for Billy Gene “Bill” Halbert, 94, of Flint, Texas will...