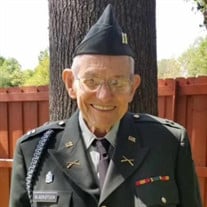 Services for Billy Frank Blackstock, 92, of Tyler will be held on Thursday, June 2, 2022 at Stewart Family Funeral Home Chapel at 10:00 a.m. with Rev. Brandon Holiski and Rev. Johnathan Ellison officiating. Burial will follow at Cathedral in the Pines Cemetery in the veteran’s section in Tyler under the direction of Stewart Family Funeral Home. Mr. Blackstock passed away Saturday, May 28, 2022 in Tyler. He was born January 31, 1930 in Alba to Olen F. and Eva Reese Blackstock. He graduated from Malakoff High School in Malakoff, TX. He graduated from Tyler Junior College with an AAS in electronics. He was an avid user of the most current technology even until his death. Billy was a member of Southern Oaks Baptist Church in Tyler. He was employed by La Gloria Oil and Gas Refinery from 1951 to 1991 and Universal Oil Products from 1991 to 1993. He also worked at Discovery Science Place for many years. Billy was a U.S. Army veteran in the 49th Armored Division from 1949 to 1970, retired Captain. Billy was preceded in death by his parents. He is survived by his loving family including his wife, Wilma Morgan Blackstock; his brother, RL Blackstock; his daughters, Pam Jett (Stephen), Patti Suggs; his stepdaughters, Jana Glotzer, Jill Fitzgerald (Don), Kelly Karp (Randy); stepson, Kim Morgan (Nancy); grandchildren, George John III (Hollie), Stephanie Thompson, Caleb Suggs (Naomi), step-grandchildren, Erin Hemperly, Dallas Griffin, Jaclyn Swanson (Jon), Shane Fitzgerald, Nicolas Fitzgerald, Kelly Morgan, Ben Morgan, Joey Morgan, and Jason Morgan; 4 great-grandchildren. He was well loved by many friends from all areas of his life. Pallbearers will be Shane Fitzgerald, Don Fitzgerald, Randy Karp, Tony Garrett, George John III and David Green. Visitation is scheduled from 6:00 – 8:00 p.m. on Wednesday, June 1, 2022 at Stewart Family Funeral Home, 7525 Old Jacksonville Highway in Tyler. If desired, memorials may be made to a veteran’s memorial fund in the city of your choice. Billy was a great supporter of honoring those who served in the military.

Services for Billy Frank Blackstock, 92, of Tyler will be held on Thursday, June 2, 2022 at Stewart Family Funeral Home Chapel at 10:00 a.m. with Rev. Brandon Holiski and Rev. Johnathan Ellison officiating. Burial will follow at Cathedral in... View Obituary & Service Information

The family of Billy Frank Blackstock created this Life Tributes page to make it easy to share your memories.

Services for Billy Frank Blackstock, 92, of Tyler will be held...

Send flowers to the Blackstock family.