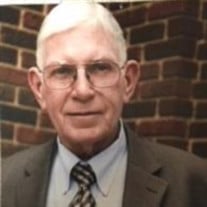 Billy Jack Fielding, 79, of Bullard passed peacefully in his home into the loving arms of Jesus and his beloved wife Patsy. He will be laid to rest at the Bullard Cemetery under the direction of Stewart Family Funeral Home. A Celebration of Life will be held in their honor on Sunday, August 9, 2020 at 2:00 p.m. at the First Baptist Church of Bullard. Mr. Fielding passed away Tuesday, July 27, 2020 in Bullard. He was born March 10, 1941 in Teaselville, Texas to Rueben (Buddy) Fielding and Lucille Stripling. Billy was a charter member of the First Baptist Church of Bullard. He served many years on the Building and Grounds committee and was very instrumental in the building of the church from day one. You could always find him riding a lawn mower or tractor, or just having coffee with Bro. Scott on Thursday mornings. He served as a deacon for many years and could be found on Sunday morning in the church office counting money. He was an active member of the Trend Setters and enjoyed traveling with his friends and playing forty-two on game night. Billy played an active role in his community and was an active supporter of the Bullard Independent School System. He traveled many miles to watch and support his grandchildren and many other children he loved in the community through Bullard Panther Sports, Bullard Panther Band and the Bullard Belles Drill Team. He also enjoyed attending the Bullard Coaches Luncheon on Thursday during football season. Because of his many years of support, he was honored with his name on the Wall of Honor at Bullard High School. He also served many years on the Bullard Volunteer Fire Department. Billy didn’t have many hobbies, but in his retirement years he enjoyed fishing, hunting and serving others. Billy was always ready to help anyone and would give you the shirt off his back if you needed it. He was the handyman of the family, had the answer to any question, and knew anybody and everybody. He was a man of few words, but when he did speak, it was something wise or witty. He was respected and loved by many and was a loving husband, wonderful Dad and granddad. He enjoyed family vacation which God blessed us with 27 years at the beach. When Billy loved you, you knew you were loved. Billy graduated from Bullard High School in May of 1959. On May 9, 1960 he married the love of his life, Patsy Templeton. They would have celebrated their 60th wedding anniversary this year. Billy held the position of Overhead Sand Supervisor when he retired from Tyler Pipe after 37 years in 1996. Billy was preceded in death by his precious wife, Patsy; his brother, Harold Fielding; his parents; his grandparents; his in-laws and many wonderful friends. He is survived by his daughter, Jacque Timmins (Paul); his daughter, Jeanna Whatley (Brian); his four granddaughters, Kaitlin Timmins Maberry (Zach), Klaire Timmins, Raiven Whatley (Ryon) and Jarrett Whatley (Mason); his brother, Charles Fielding (Kay); his sisters, Nadine Lee (Albert) and Karine Miller; his sister-in-law, Beverly Fielding; his brother-in-law, Charles Templeton (Sandra); and many nieces and nephews. Pallbearers will be Trent Talley, Randy Lee, Jake Langston, Chuck and Wyatt Fielding, Matt Fielding, Canyon and Dakota Butler, Bradley and Zachary Fielding. Honorary pallbearers will be Josh Prewitt, Joe Cavender, Steven Langston, Randy Hurst, Paul Laney, David Murray, Bobby Bateman, the men of the Belayers Sunday School Class and the Barnabus Sunday School Class. Special thanks to Dr. Lee Ridenour and staff; Dr. Tsauyu Lin; and Hospice of East Texas. If desired, memorials may be made to FBC Building and Grounds Committee, FBC Trend Setters Ministry (both at 1428 S. Houston St., Bullard, TX 75757), or The Hospice of East Texas Foundation at 4111 University Blvd., Tyler, TX 75701.

Billy Jack Fielding, 79, of Bullard passed peacefully in his home into the loving arms of Jesus and his beloved wife Patsy. He will be laid to rest at the Bullard Cemetery under the direction of Stewart Family Funeral Home. A Celebration of... View Obituary & Service Information

The family of Billy Jack Fielding created this Life Tributes page to make it easy to share your memories.

Billy Jack Fielding, 79, of Bullard passed peacefully in his...

Send flowers to the Fielding family.