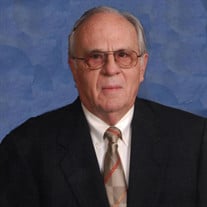 Services for Billy C. Hall, 81, of Tyler will be held on Wednesday, June 10, 2020 at 11:00 a.m. at First Baptist Church in Tyler with Stephen Carrell of Park Cities Baptist Church in Dallas and Pike Wisner of First Baptist Church in Tyler officiating. Burial will be at Pleasant Grove Cemetery in Sulphur Springs under the direction of Stewart Family Funeral Home. Mr. Hall was born in Alexandria, Louisiana July 17, 1938 to Latane and Ike Hall. He graduated from Tyler High School in 1956, where he played basketball and baseball and was named to the first-team all-state basketball team his senior year. He attended Baylor University, where he graduated with a BS degree in Education in 1960. At Baylor, he served as captain of the 1960 baseball team and was a member of the Baylor Chamber of Commerce. He continued his education at Stephen F. Austin State University with a graduate degree in Educational Administration. Other post-graduate work was completed at East Texas State University, Ohio University and the University of Texas at Austin. He was employed by Tyler ISD in 1960 and completed his career there in 2001, after serving at Robert E. Lee High School as a teacher, coach, assistant principal, principal and later, as TISD athletic director. After a year in retirement, he served again as TISD interim athletic director and later, as interim director of CASA (Court Appointed Special Advocates). Mr. Hall was a member of First Baptist Church, where he served as a deacon and worked as co-director of the Young Adult Sunday School Department for many years. He was a member of the Royal Family Kids Camp staff for several years, serving children in foster care. He was president of the downtown Rotary Club, where he was honored as a Paul Harris Fellow. He also served as a member of the Crime Stopper Board and was on the committee that researched and raised funds to establish the Smith County Juvenile Attention Center. He was a former board member of Teachers Cooperative Credit Union and of Azleway. Mr. Hall was awarded a life membership in the Texas PTA while at Robert E. Lee and was presented the district’s first National Parent-Teacher Association Life Membership. He was inducted into the first TISD Athletic Hall of Fame in 2013. He loved watching his granddaughters in cheerleading, volleyball, softball and basketball. Mr. Hall is survived by his wife, Sue; son, Greg; his three granddaughters, Alexa, Alyia and Alysa of White Oak and their mother, Stacey Hall; as well as his nephew, Josh Verdoorn, his aunt, Kathleen Swartz; and many loving cousins. He was preceded in death by his son, Andy and his sister, Jackie Verdoorn. Visitation is scheduled from 6:00 to 8:00 p.m. on Tuesday, June 9, 2020 at Stewart Family Funeral Home, 7525 Old Jacksonville Highway in Tyler.

The family of Billy C. Hall created this Life Tributes page to make it easy to share your memories.

Services for Billy C. Hall, 81, of Tyler will be held on Wednesday,...

Send flowers to the Hall family.