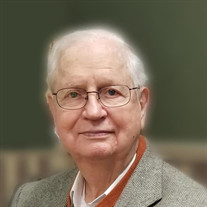 Bill Leonard, age 87, passed away October 21, 2021, at Providence Park Rehabilitation and Skilled Nursing Facility in Tyler, Texas. Graveside services and burial will be Saturday, October 30, 2021, at 3:00 p.m. at Salado Cemetery with Josh Hays officiating. Bill was born in Houston and grew up in Navasota and Clarksville. He graduated in 1955 from the University of Texas and was a pharmacist for over 50 years. After graduation, he married Edith Bays from Munday, Texas. He served in the Army 1956-1958 and returned to Texas where he resumed being a pharmacist. In 1961, he and his brother, Jack, bought and operated Westside Drug Store in Temple until the death of his brother in 1981. Thereafter, Bill continued working in various pharmacies as a relief pharmacist. Bill was a member of Baptist churches in the towns in which he lived and was a long-time Mason. Bill was preceded in death by his wife, Edith, his parents George and Mamie Leonard, and brothers George Jr. and Jack. Survivors include his daughter Peggy Hudson of Waco (husband Jim), son Billy Glenn (“Dooner”) Leonard, Jr., granddaughters Meredith Hudson, Melinda Nolen, Laura Madeline Thibault, grandson, Nate Leonard, and three great grandchildren, William, Theodore, and Clara Violet. Graveside services and burial will be under the direction of Stewart Family Funeral Home of Tyler.

The family of Billy Glenn Leonard created this Life Tributes page to make it easy to share your memories.

Send flowers to the Leonard family.