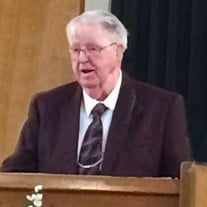 On April 15, 2020 our beloved husband, Dad and Granddad, Billy Watson, walked into the arms of his heavenly father whom he has loved, served and preached for most of his life. What a reunion it was! His memorial service will be held at 2:00 p.m., Saturday, August 22, 2020 at the Leagueville Baptist Church, 12081 FM 317, Murchison, TX, 75778, with Rev. Terry Cooper and Rev. Tom Bragdon officiating. Billy Watson was born January 24, 1925 in Jonesboro, TX to Rube and Myrtle Scott Watson. He grew up during the depression the sixth son of a sharecropper. He graduated from Jonesboro High School, where he played basketball and ran track. After high school, he and his best friend, Earl Derrick joined the Navy. He served aboard the USS Bunkerhill. Five of the six Watson brothers served in war zones. During the war he lost his brother, Scott and his best friend, Earl. After the war he met and married the love of his life, Shirley Bollier. They were married on May 31, 1947. They were blessed with two children. In January 1957, Bill surrendered his life to preach the gospel of Christ which he did for as long as he could speak. He pastored for forty-seven years, pastoring 5 churches across Texas, preached numerous revival meetings and performed scores of baptisms, funerals and weddings. His longest pastorate was Leagueville Baptist Church, Brownsboro. He accepted that pastorate in November 1963 and Brownsboro became the forever home of their family. Bill was preceded in death by his parents; his brothers, Johnny, Curtis, S.T., Dillard, and Scott; and a sister, Rudene Weaver. He is survived by his wife of 73 years, Shirley; daughter, Ludene Durham and husband Dink; son, Billy Earl Watson all of Tyler; two grandchildren, Jeremy Durham and wife Lisa of Tyler, and Alisha Lynn of Houston; five great-grandchildren, Sam and Cecilee Lynn of Houston and Colby Durham and wife Taryn, Collin and Kinsey Durham all of Tyler; one great-great grandchild, Asher Durham; and a number of nieces and nephews and many treasured friends. II Timothy 4:7-8 I have fought a good fight, I have finished my course, I have kept the faith: Henceforth there is laid up for me a crown of righteousness, which the Lord, the righteous judge, shall give me at that day: and not to me only, but unto all them also that love his appearing.

On April 15, 2020 our beloved husband, Dad and Granddad, Billy Watson, walked into the arms of his heavenly father whom he has loved, served and preached for most of his life. What a reunion it was! His memorial service will be held at 2:00... View Obituary & Service Information

The family of Billy Cecil Watson created this Life Tributes page to make it easy to share your memories.

Send flowers to the Watson family.