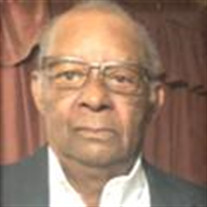 Services for Bobby Ray Freeman, of Dallas, will be held on Saturday, February 29, 2020 at 10:00 a.m. in Stewart Family Funeral Chapel with Rev. Billy G. Shedd, Sr. officiating, and Rev. Melton R. Timmons, Eulogist. Burial will follow at Evergreen Memorial Park Cemetery in Tyler under the direction of Stewart Family Funeral Home. Mr. Freeman one of God’s angels earned his wings on Monday, February 17, 2020 at a hospital in Dallas, TX. He was born September 25, 1938 in Lindale to Hurbert Freeman and Rosezell Weldon Freeman, where he would start life on a farm working alongside his dad, brothers and mother to make a good life for them all. Bobby became a member of Friendship Missionary Baptist Church, Tyler, TX, at an early age. Bobby was united in marriage to Don Ella Hardeway Freeman for 53 years and they have 3 children. He was a graduate of Emmitt Scott High School. Upon graduation Bobby joined the United States Air Force getting to see parts of the world most people only dream about doing his service to his country. After completing his years in the Air Force in 1963, Mr. Freeman, a trail blazer and hard-working person became the first black manager of a 7-11 store in Dallas, TX. Later in his career he became one of two black sales representatives for Kraft Foods Co. After retiring Bobby continued to care for the farm, driving 90 miles to Lindale at least twice a week taking care of the cows he so loved. Left to cherish his memories are his wife Don Ella, daughter Natalie, sons, Dwight (Rosalyn) Lancaster, Dwayne (Vivette) Ovilla, Grandkids Cory, Charise, Josslyn, Jordan, D’aundria, & Dionne. A great-granddaughter Camdyn. Sister Cuvia Lewis (Paul), nieces, nephews and a host of other family & friends.

The family of Bobby Ray Freeman created this Life Tributes page to make it easy to share your memories.

Services for Bobby Ray Freeman, of Dallas, will be held on Saturday,...

Send flowers to the Freeman family.