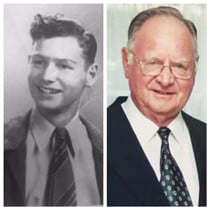 Graveside services with military honors for Bobby Stalcup, 91, of Tyler, will be held on Wednesday, November 27, 2019 at DFW National Cemetery in Dallas with Pastor Dan Schmidt officiating under the direction of Stewart Family Funeral Home. Bobby passed away Monday, November 18, 2019 in Tyler. He was born on July 7, 1928 in Handley, Texas to Clyde Houston Stalcup and Gladys Marie Richardson Stalcup. He married Roberta Jeanne Saenger on September 15, 1950 in Little Rock, Arkansas and they had one daughter, Linda Jean Stalcup McDanel, who married Conal Edward McDanel. Bobby is also survived by two granddaughters, Dori Jean McDanel Reuscher and Crysta Marie McDanel Godsey and eleven great-grandchildren: Jon Conal Reuscher, Noah Allen Godsey, Dacy Marie Reuscher, Wyatt Allen Godsey, Sam Joseph Godsey, Max Hugh Reuscher, Tobin McDanel Godsey, Lindy Abigail Godsey, Annabelle Grace Godsey, Gloria Marie Godsey and Boaz Daniel Godsey. He was predeceased by his brother William Stalcup and is survived by his sister Virginia Stalcup McClure of Albany, Georgia. Growing up in Handley, Bob loved his dogs and horses, often riding his horse to school. He had a paper route and also worked at the local grocery store, where he met his future wife, Roberta Jeanne. She was called Bobbe back then, so they became Bobby and Bobbe. They were later married by Rev. Bobb! To avoid confusion after they were married, Bobbe Jeanne became Jean. Bob joined the service in 1947 and was transferred to England where, in 1953, the couple became parents to Linda Jean. Bob stayed in the Air Force for 23 years, transferring from one assignment to another. They lived in England, Mississippi, South Carolina, Colorado, New Jersey, Alaska, Delaware and, finally, after retiring from the Air Force in 1968, they moved back to Texas. He began working for Handy Dan Hardware in San Antonio, then established his own paint store, Painter’s Supply, in Marble Falls. There they purchased a house on Lake LBJ where the family spent many happy days boating, swimming, holding birthday parties, family reunions and just relaxing. In 2015, they moved, along with Conal and Linda, to Tyler. By then, Bob had begun to see symptoms of Vascular Dementia. He was admitted to Memory Care in 2019 and finally succumbed to that disease on November 18, 2019. Some of Bob’s happiest days were in Alaska, where they camped, fished and made so many wonderful friends. He enjoyed helping friends clear land and build their homestead in Soldotna, sledding down Government Hill, building skating rinks in the backyard, playing cards with friends, and making pottery on base. He always talked about how he enjoyed his job supplying airplane parts on the flight line in Alaska. Bob was good-natured, kind, funny and a wonderful husband and father. He loved to joke; the cornier, the better, and he especially loved big band music and dancing! Most important, he was devoted to his wife, Jean, and his family. He knew Christ as his savior, and will be happy now in Heaven, where we will see him again. If desired, donations in his memory may be made to the Alzheimer’s Alliance of Smith County 221 Winchester Dr., Tyler, TX 75701. Dad: Your love, your patience, your understanding, your wisdom and your amazing sense of humor will live on inside us forever. You have given us gifts that are more precious than anything in this world. Goodbye, for now, Dad. You will always live on in our hearts.

Graveside services with military honors for Bobby Stalcup, 91, of Tyler, will be held on Wednesday, November 27, 2019 at DFW National Cemetery in Dallas with Pastor Dan Schmidt officiating under the direction of Stewart Family Funeral Home.... View Obituary & Service Information

The family of Bobby Hugh Stalcup created this Life Tributes page to make it easy to share your memories.

Send flowers to the Stalcup family.