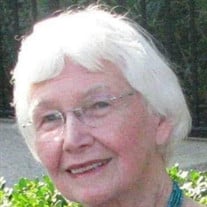 Bonnie Jean Bellomy Richards, 93, passed away peacefully in her sleep on Wednesday, May 27, 2020. She will be remembered with a graveside service at Rose Hill Cemetery in Tyler, TX. As a Tylerite by birth, Bonnie Jean grew up and attended Tyler High School where she was a member of the Honor Society. Her desire to be a teacher after graduation led her to attend the University of Texas and the University of North Carolina where she graduated with a Bachelors Degree and obtained a teaching certificate. She later attended the University of Houston, and earned a Masters Degree in Education, and English. She met her future husband, Harry Lee Richards, on a blind date, and they were later married at the First Baptist Church in Tyler. They spent the first years of their married life traveling the country as part of a seismic crew with Independent Exploration while living in a travel trailer. Bonnie Jean would talk about those days with great satisfaction, stating that those were some of the happiest days of her life. They returned to Tyler for a time, but eventually settled in Houston where they raised their three daughters. In the late 1970’s, Bonnie and Harry returned to their East Texas roots and moved back to Tyler. She held administrative positions with various companies in Tyler and Houston including Delta Drilling Co, Shell Oil Co., Cameron Iron Works and the Tyler Police Department; and after earning her Masters Degree, she taught Fourth Grade at James Bowie Elementary in Houston for several years. She was very artistic, and found joy in sewing and cooking for her family. As a member of the Baptist Church, she enjoyed teaching children’s Sunday School and Vacation Bible School for many years When asked, those who knew her well would tell you that she was gentle, kind, considerate, a very caring woman who respected and loved others, and a woman who loved the Lord. Her children would tell you that she was caring. If you went to her with your troubles she would take them on for you. She loved her family and children and prayed for them daily. Bonnie was a fierce ally and protector of those she loved, and she was a devoted wife to her husband of 47 years. She was preceded in death by: her parents, Curtis Aubrey and Bonnie Frank Smart Bellomy; her loving husband, Harry Lee Richards; and her younger brother, Jimmy Frank Bellomy. She is survived by three daughters: Jean King Gevirtz and husband, Joel, of Houston; Jerri Brezik and husband, Jim, of Seabrook, and Janice Ernest of Tyler; along with her grandchildren: Genevieve Lee Brown of New Orleans, LA; Jonathan Wesley King of Tampa, FL, and Bradley Christian Gabel and wife, Rhiannon, of Seabrook, TX; as well as a number of step-grandchildren, great-grandchildren and other family members. She is dearly loved and will be greatly missed by all who loved and knew her.

Bonnie Jean Bellomy Richards, 93, passed away peacefully in her sleep on Wednesday, May 27, 2020. She will be remembered with a graveside service at Rose Hill Cemetery in Tyler, TX. As a Tylerite by birth, Bonnie Jean grew up and attended Tyler... View Obituary & Service Information

The family of Bonnie Jean Bellomy Richards created this Life Tributes page to make it easy to share your memories.

Bonnie Jean Bellomy Richards, 93, passed away peacefully in her...

Send flowers to the Richards family.