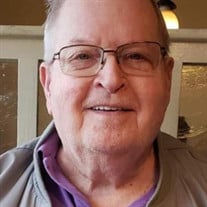 A private graveside service will be held for Brian Earl Sanders, 82, of Tyler, on Wednesday, April 1, 2020 under the direction of Stewart Family Funeral Home with Brother Tim Mason officiating. Brian passed away Thursday, March 26, 2020 at his home. He was born February 13, 1938, in Gilmer, to Floyd B. Sanders and Annie Lee King Sanders. He graduated from Tyler High School in 1956 and attended University of Texas at Austin and Sam Houston State University, with plans of becoming a pharmacist. In 1961, while working for Tyler Pipe, he met his future wife, Judy. Drafted into the Army, and inducted in 1961 shortly after his wedding, he served as a pharmacist in his company and was part of the preparation team ahead of the Cuban Missile Crisis. Upon returning to Tyler, he attended Tyler Junior College, graduating with an Associates in Arts in 1965. He held the position of Product Inventory Control Manager with Moen Incorporated before retiring in 2001. Brian was an active member of Midway Baptist Church where he served as deacon for numerous years. Brian was preceded in death by his wife of 54 years, Judy Granberry Sanders; his grandson, Michael Hammonds; his brother, Kenneth Sanders; and his parents, Floyd & Annie Lee Sanders. He is survived by his loving family including daughter, Kathy Cope; daughter, Karen French and her husband, Steven French; daughter, Robin Sanders; granddaughter, Bridgette Hammonds; grandson, Brandon Cope; grandson, Benjamin Cope; great-granddaughter, Ava May Cates; great-granddaughter, Brooks Cates; great-grandson, Michael Cates; and numerous cousins, nieces, and nephews. A memorial service will be held for the public at a later time. If desired, memorials may be made in the form of donations to Midway Baptist Church, 13798 State Highway 155 S, Tyler, TX 75703; SPCA of East Texas, P.O. Box 132899, Tyler, TX 75713; or the American Heart Association, P.O. Box 841125, Dallas, TX 75284-1125.

A private graveside service will be held for Brian Earl Sanders, 82, of Tyler, on Wednesday, April 1, 2020 under the direction of Stewart Family Funeral Home with Brother Tim Mason officiating. Brian passed away Thursday, March 26, 2020 at... View Obituary & Service Information

The family of Brian Earl Sanders created this Life Tributes page to make it easy to share your memories.

A private graveside service will be held for Brian Earl Sanders,...

Send flowers to the Sanders family.