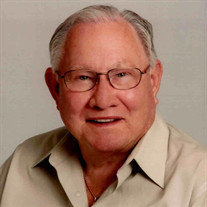 Carey Arthur Woods, III passed away July 10, 2021, at home in Tyler, TX surrounded by family. Carey was born September 15, 1942, in Long Beach, CA to parents Carey Arthur Woods, Jr. and Marion Herd Woods. He was in the first graduating class at Robert E. Lee High School in 1961. After graduation, Carey then served in the U.S. Navy, December 1961-December of 1963, aboard the USS Detector MSO 429, a wooden hull mine sweeper, with reserve obligation ending May of 1966. He came home and attended North Texas State. Although he grew up in the family air-conditioning and plumbing business, his salesmanship took him into the car business for approximately 14 years. He was a promoter for various celebrities in the sixties such as Ike and Tina Turner and Ray Charles bringing them to the Oil Palace in Tyler. Later in life Carey was driven by “the thrill of a deal” in real estate business transactions allowing them opportunities to live in different locations. Carey acquired J.P. Morrow Company Air-Conditioning and Plumbing in Alice, TX along with George C. Cunningham Air-Conditioning and Heating in Harlingen, TX before purchasing C. Woods Co. from his father in 1995. Along with his wife, Monica, they operated the business until, due to health issues, he sold the business, but then later established Woods Comfort Systems in San Marcos, TX. Supporting his children in rodeo activities and involving them in the air-conditioning business helped instill a true work ethic - work first and fun later. That fun included Carey’s love of lake life with his family at Lake LBJ in Horseshoe Bay and Lake Tyler. He worked hard and played hard. A warrior in his fight against heart disease, liver cancer, and leukemia, Carey was also a true patriot and conservative touching many lives with his spirit, kindness, and generosity. He took great joy in being a greeter at Marvin UMC, being a member of the Mineola Kiwanis Club, and a committed member of the Olympic Plaza workout center for daily exercise where he enjoyed the camaraderie with fellow members. He was an avid supporter of various fund raisers including St. Jude’s, American Cancer Society, Heart Association, conservative ideals and leadership, and the El Progreso Memorial Library. He considered his employees and past employees as family and offered assistance when needed. Carey is survived by his wife of 28 years, Monica Greathouse Woods; sons Carey Arthur Woods, IV (Chip) and wife Pamela of Alice, TX; Chris Woods of Lakeway, TX; Jack Ware and wife Allison of Corpus Christi, TX; Waco Ware and wife Kelly of Taft, TX; and Will Doran and wife Meagan of Tyler, TX; sister Marion Krug and husband Jeff, of Alta Loma, CA; mother-in-law Margie L. Bourn of Crystal City, TX; sister-in-law Vickie Weisinger of Uvalde, TX; and brother-in-law Joe Greathouse and wife Irma, of Crystal City, TX. He is also survived by three nieces. Carey was very proud of his ten grandchildren who dearly loved their Pawpy. The family would like to thank their long time family friend and care-giver, Lottie Ervin; and family internist, Dr. Thomas Buzbee and staff of TIMA. He was preceded in death by his parents and sister, Nancy Brumley Posey. Services are scheduled for Saturday, July 24, 2021 at 10:00 a.m. at Stewart Family Funeral Home in Tyler, TX. The family invites you to enjoy coffee and donuts with them in Carey’s memory one hour prior to the service. Memorial donations in his honor can be made to the charity of one’s choice.

The family of Carey Arthur Woods III created this Life Tributes page to make it easy to share your memories.

Send flowers to the Woods family.