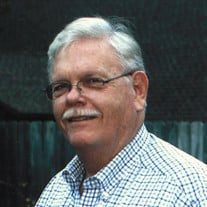 “Where everybody knows your name” may be a lyric from the Cheers theme song but it was a true statement about the life of Carl Wayne Pirtle who passed away at the age of 79 on Aug. 24, 2021, in Tyler, Texas. No matter where he went, Carl always struck up a conversation with a friend. It was no surprise that it seemed like he knew everyone as most of his life was spent in Tyler. Born to Shelby and Irene Pirtle on Oct. 30, 1941, Carl grew up in Tyler where he graduated from Robert E. Lee High School in 1959. Two years later, he married the love of his life, Judy Richardson, in Tyler. Despite about a 10-year stint in Houston, the couple lived out their 60-year marriage in Tyler. Carl worked in and owned an insulation company before he transitioned into real estate where he spent most of his professional career working with his wife. The couple had two sons - Carter and his wife, Kathy Pirtle of Skellytown, Texas, and Hunter and his wife, Nancy Pirtle of Whitehouse, Texas - and five grandkids - Krista, Hunter and wife, ChristaBryn, Grayson, Brennan and Colin - with a great-grandson on the way. He is also survived by his wife, Judy and sister, Joyce Hibbert of Tyler along with nieces and nephews. If you needed to find Carl, the best bet was that he was at the lake fishing. He loved going out to the lake with friends and family to catch some fish. He knew what bait was best for what he wanted to catch and how to dodge when his grandchildren decided to cast. A true iPhone professional, his family and friends got to witness the inner workings of his ear when he forgot that he had FaceTimed instead of called. Carl also liked to remind people where the state troopers usually parked to make sure they knew to come to a complete stop. Not only did Carl teach those closest to him how to fish, he also taught them about Christ through his words and by his actions. He was always whistling the tunes to the old hymns and serving in whatever ways he could. Carl was preceded in death by his parents and brother, Gordon. A memorial service will be held at 2 p.m. on Friday, Aug. 27 at Stewart Family Funeral Home with Dr. Darryle Dunks officiating and Carter Pirtle assisting. A private family burial will be held at a later date at Rose Lawn Cemetery in Tyler. In lieu of flowers, please make a donation to the mission endeavors of Emerald Bay Community Church (www.emeraldbaychurch.org) 160 La Salle Rd., Bullard, Texas 75757.

&#8220;Where everybody knows your name&#8221; may be a lyric from the Cheers theme song but it was a true statement about the life of Carl Wayne Pirtle who passed away at the age of 79 on Aug. 24, 2021, in Tyler, Texas. No matter where he... View Obituary & Service Information

The family of Carl Wayne Pirtle created this Life Tributes page to make it easy to share your memories.

“Where everybody knows your name” may be a lyric from the Cheers...

Send flowers to the Pirtle family.