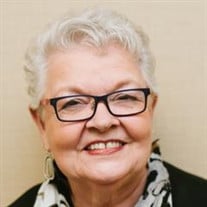 Memorial services for Carol Ann Jackson Sample, 72, of Hideaway, will be held on Saturday, June 25, 2022 at 2:00 p.m. at Stewart Family Funeral Home in Tyler with Rev. Keith Irwin officiating under the direction of Stewart Family Funeral Home. Carol Ann passed away peacefully on Wednesday, June 22, 2022 at her home in Hideaway Lake with her husband by her side. She was born August 1, 1949 in Lufkin, Texas to Billy Dan and Millie Ann Jackson. Carol Ann was married to James Nick Sample on May 22, 1971, celebrating 51 beautiful years of marriage. She was the first female student to attend the College of Architecture at Texas Tech University where she was a member of Alpha Delta Pi Sorority, eventually graduating with a Bachelor of Science in Architecture and City Planning in 1973. Upon graduation from Texas Tech, Carol Ann served briefly in Lubbock as an Assistant City Planner. Nick and Carol Ann moved to Tyler, Texas in 1974 where she served as a Senior City Planner. She received her Masters in Architecture Management from Kansas University in 1994. Carol Ann was a devoted Christian, wife, mother, entrepreneur, educator, political activist, and artist. She faithfully attended Grace Community Church from 1974-1987. She taught Computer Science, Advanced Physics and Biology at Grace Community School. She was the owner of Anything Green Garden and Landscaping Company in Tyler. She served in Bible Study Fellowship for over 22 years across four states (Texas, Kansas, Iowa and Maryland) and was a founding member of Christ Community Church in Kansas City, Kansas while working as Director of Real Estate Planning for Sprint Corporation. She served on the Board of Directors for Here’s Life Kansas City (CRU) and Womenary. She was the Mayor Pro Tem of the city of Hideaway, Texas. She was an avid architect and designer of fantastic homes in Tyler, TX; Useppa Island, FL; Annapolis, MD; Ruidoso, NM; Lake Tyler, and Hideaway Lake. She spent much of her free time landscaping her homes and painting in her artist studio scenes from God’s beautiful nature. Proceeded in death by her parents, Billy Dan Jackson, Millie Ann and Frank Kolb, her sister, Debra, and her brother, Alan. She is survived by her devoted husband of 51 years, Nick Sample; their son, Chris Sample, his wife, Lauren and their children, Grace, Jackson, Zoe, and Naomi of King George, VA; their son, Daniel and his children, Gabe and Douglas from Maryland, and Parker from Pennsylvania; their daughter Sarah, her husband, Bryan and their son, Bowen from Dallas, Texas. She is also survived by her brother, David from Durango, Colorado; and her sisters, Patricia from Hampton Roads, Virginia and Teresa from Corpus Christi, Texas; and a number of beloved aunts, uncles, cousins, brothers and sisters-in-law, nephews, nieces, and friends. In lieu of flowers, the family requests that those who wish to express sympathy consider donating to Keith Irwin Ministries (www.keithirwinministries.org) P.O. Box 372, Lindale, TX 75771 or Womenary (www.womenary.com) P.O. Box 6296, Tyler, TX 75711.

The family of Carol Ann Jackson Sample created this Life Tributes page to make it easy to share your memories.