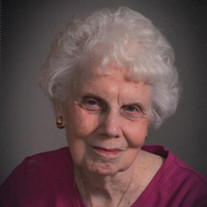 Mary Caroline (Smith) Miller was born on August 18, 1930, in Kansas City, Missouri, to Gardner and Buel Smith. She passed away on April 26, 2021, at the age of 90. A private graveside service was held at the Cathedral in the Pines Cemetery in Tyler, Texas. A Celebration Service will be held at Pollard United Methodist Church at a later date. After growing up with her sister, Eleanor (Harnley), in Kansas City, she attended and graduated from Central Methodist College. Following medical tech training at Menorah Hospital in Kansas City, she moved to Dallas, Texas, and started working at Baylor Hospital. During this time, she met Eugene Miller and they married on May 23, 1956, and were married for 59 years until his death in 2015. Their son, Greg, was born in 1958 and as Eugene advanced in his career with Nabisco, they moved to Oklahoma City, Oklahoma, where their daughter, Elizabeth, was born in 1963. During their time in OKC, Caroline took up golf to complete a foursome with her neighbor friends. In 1968, Eugene was promoted, and they moved to Tyler, Texas, where she spent the next 53 years. They joined Pollard United Methodist Church and if there was a program going on, Caroline was involved! She sang in the choir, played handbells, was in the United Methodist Women’s ministry and attended Sunday School. As part of the handbell choir, she made trips to international handbell festivals in Exeter, England, and Adelaide, Australia. When Pollard started their theater program, both Caroline and Eugene were involved in not only making costumes, sets, refreshments, etc., but also had an occasional acting role! Two of Caroline’s passions were sewing and knitting. Besides costumes, she started making outfits for herself and Elizabeth but then advanced to making outfits for her grandchildren and then great-grandchildren! One of her greatest passions was knitting baby blankets for her friends’ newborns and then her own grandchildren and great-grandchildren. Next to a cloud, the baby blankets were the softest things on Earth! She was knitting a blanket for her next-door neighbor’s soon-to-arrive baby in 2020 when she suffered a stroke. But in the hospital and rehab, she was always looking for that blanket so she could finish it. Fortunately, a friend was able to finish it and it was given to the neighbor. Service to others was her main goal in life. When her own mother was in a nursing home in Tyler, she started organizing a monthly birthday party at the nursing home for the residents. With the help of friends, she continued the parties for years, long after her mother had passed. She and Eugene both volunteered at St. Paul Children’s Foundation working with kids on crafts and skills. Through the church, she touched so many peoples’ lives. One of her favorite expressions from her childhood was to “Give Flowers To The Living,” which meant that instead of sending flowers to someone’s funeral when they couldn’t appreciate it, tell them now how much you appreciate someone or something they did while they are around to appreciate it! She enjoyed her life in Tyler and was blessed with wonderful neighbors that were like family to her. Her gardening skills were a great source of pride and she was always willing to share tips or a cutting for others to grow their own! She played tennis at the swim and tennis club and had a mean swing for someone so small! There are many happy memories of time spent on the land they bought and raising horses and the cattle. Elizabeth was usually seen riding her horse, Caesar, while Greg rode his mini-bikes from corner to corner. It wasn’t beneath her to put out hay and range cubes when Eugene was out of town on business! She also worked for years as a med tech at Medical and Surgical Clinic. But being a wife, mother, grandmother and great-grandmother was her greatest joy. She is preceded in death by her parents and her sister with Eugene passing away in 2015. She is survived by her son, Greg (Susan) Miller; and daughter, Elizabeth (Lance) Wilborn. She is also survived by granddaughters, Drs. Mary Beth (Todd) Phillips; Julie (Rick) Neal and Erin Wilborn; as well as great-grandchildren, Jonathan and Abigail Neal and Jack and Sophie Phillips. She is survived by three nieces, Caroline Harnley, Martha Harnley and Nancy Altschuler. Details of her Celebration Service at Pollard UMC will be made available as a time is picked for later in the summer. In lieu of flowers, memorials may be made to the Pollard UMC Music Program, 3030 Copeland Rd., Tyler, TX 75701 or to St. Paul Children’s Foundation, P.O. Box 1238, Tyler, TX 75710.

Mary Caroline (Smith) Miller was born on August 18, 1930, in Kansas City, Missouri, to Gardner and Buel Smith. She passed away on April 26, 2021, at the age of 90. A private graveside service was held at the Cathedral in the Pines Cemetery... View Obituary & Service Information

The family of Caroline Miller created this Life Tributes page to make it easy to share your memories.

Send flowers to the Miller family.