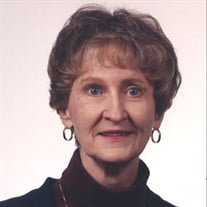 Carolyn Gosnell McLane passed away peacefully, surrounded in love by family and friends, on Friday, August 7, 2020 in Tyler, Texas. She was born October 17, 1938 in Morris, Oklahoma to Earl and Lonnie Gosnell. Services for Carolyn, 81, will be held on Thursday, August 13, 2020 at 11:00 a.m. in the Stewart Family Funeral Home chapel with Rev. Steve Ditmore and Rev. Andy Tyler officiating. The service will be livestreamed on the Stewart Family Funeral Home website. Masks will be required for those attending the service in person. Burial will follow at Lakeview Memorial Gardens in Longview under the direction of Stewart Family Funeral Home. Visitation will be from 10:00 to 11:00 a.m. before the service. Carolyn grew up in East Texas where she graduated from Pine Tree High School. She was a majorette and played the clarinet in the band. She also sang with Choral and Vocalettes and was a member of FHA. After graduation she attended Kilgore College. She met Travis while in high school. They married on August 15, 1958. Carolyn and Travis were blessed with two daughters. Their life together had them living in many locations in Texas as well as seven years in Tripoli, Libya and ten years in Stavanger, Norway. Their years overseas allowed them to travel to many fun places in Europe and the Middle East. Carolyn and Travis continued to travel after they retired to Tyler in 1999. Carolyn was a wonderful wife and mother. Her interests outside the home always included her church and women’s Bible study. She served the church in many ways from playing the piano to VBS. She bowled in a league and she was a member of the Sewing Guild. She loved to stitch and has many masterpieces to show for it. She read books of all kinds but especially liked a mystery. Carolyn was preceded in death by her parents; brothers, Dale Gosnell and Charles Gosnell and sister, Patricia Everett. She is survived by her husband, Travis McLane; daughters, Pam Grider and Julie McCown; sons-in-law, Gary Grider and Doug McCown; grandchildren, Allison Grider, Chris Grider, Margaret McCown and Frank McCown. She is also survived by siblings, Shirley Dunning, Kenneth Gosnell of Tyler, Eddie Gosnell and wife Sally of Rio Rancho, NM; a special niece, Barbara Tyler along with many other nieces and nephews; and sisters-in-law, Luz McLane and Elna Gosnell. Pallbearers are Gary Grider, Chris Grider, Doug McCown, Frank McCown, Dean Dunning and Seth Tyler. Honorary pallbearer is Frank Chapman. If desired, in lieu of flowers, memorials may be made to the Gideons International, P.O. Box 140800, Nashville, TN 37214 or to Breckenridge Village of Tyler, 15062 County Road 1145, Tyler Texas 75704.

Carolyn Gosnell McLane passed away peacefully, surrounded in love by family and friends, on Friday, August 7, 2020 in Tyler, Texas. She was born October 17, 1938 in Morris, Oklahoma to Earl and Lonnie Gosnell. Services for Carolyn, 81, will... View Obituary & Service Information

The family of Carolyn Gosnell McLane created this Life Tributes page to make it easy to share your memories.

Send flowers to the McLane family.