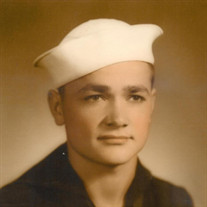 Cecil Lee Venable, age 97, of Frisco, Texas passed away on January 19th 2021 in Tyler, Texas. He was born December 12, 1923 to Dora Luella (Rosson) and Horace Jennings Venable. He was born at home ¾ mile north of Bardwell, Ellis County, Texas. Bardwell is located between Italy and Ennis. He married Betty Ruth Coots December 3, 1944. In the late 1940s his family moved to the community of Navo in Denton County. He married Betty Ruth Coots on December 3, 1944 and immediately left for his military service with the United States Merchant Marines. He sailed on container ships that supplied the army with supplies. He served in the US Merchant Marines from December 1944 until April 1946. He was discharged with the rank of F/2C. After his military service, they moved to the Frisco area. At that time he began to work at UNIVERSAL in Dallas building windows. In 1956 he decided he could make a living farming and grew wheat, oats, milo (maize), corn and cotton. Through the years he farmed as many as 750 acres. He retired from farming large acreage in 1990 and began farming the half acre garden in his back yard. While farming, early mornings found him delivering mail on a 66 mile rural route in the Frisco/Little Elm area. In 1988 after 30 years he retired from carrying the mail. He is survived by his daughter, Cecilia Ann Venable Brannon and her husband Terry, and his son, Harold Keith Venable. His is survived by grandchildren, Leah Brannon Masey and husband Randy; Julie Brannon Krull, husband Chris; Meredith Venable Weber, husband Chris; Amanada Venable Aycock, husband Casey. He is survived by four great-grandchildren, McKenzie Shae Masey, Zachary James Masey, Emily Grace Krull and Victoria Ann Webber. He was preceded in death by his wife, Betty Ruth Coots Venable. At her death on January 4, 2015 they had been married 70 years. He was preceded in death by his parents Horace Jennings and Dora Luella Venable; his four brothers, Louie Randall, Horace Jennings, Jr. (Buddy), James Cameron, Harold Edward. A family graveside service and interment will be at Little Elm Cemetery in Little Elm, Texas.   In lieu of flowers, memorial may be made to Green Acres Baptist Church Foundation, 1607 Troup Hwy #110, Tyler, TX 75701 or a charity of your choice.

The family of Cecil Lee Venable created this Life Tributes page to make it easy to share your memories.

Send flowers to the Venable family.