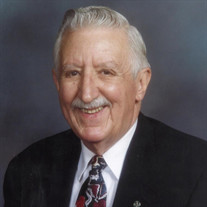 “I have fought the good fight, I have finished the race, I have kept the faith.” A celebration of life for Charles Lewis Aber, 93, of Tyler, will be held Monday, December 21, 2020 at Whitehouse Cemetery with Dr. Stuart Baskin officiating under the direction of Stewart Family Funeral Home. Charlie was a loving husband and father who had been blessed with a givers heart. He never met a stranger. He did forget names but never a face. He had a passion for helping others; for sharing his God given abilities to provide joy and pleasure for others and often quoted scripture to contribute assistance to others. Charlie was born in the year of our Lord, 1927, to Scottish parents, Charles Lewis Aber Sr. and Elizabeth Russel Aber. He was profoundly proud of his Scottish heritage, and was blessed to have been able to spend considerable time in Scotland over several years. He was widely known for his willingness to share one of his God-given abilities – that of blowing the bagpipe – with any church who desire to have piping a part of their service. It was with distinct humility that Charlie expressed his sincere gratitude of having been privileged to share his pipes in numerous Tyler churches. Additionally, Charlie was favored to serve many area functions i.e. East Texas Medical Center celebrating 65 years of service to this community; dedication ceremonies of several Southside Bank facilities, various veteran rituals, etc. He served our country during WWII in the Marine Corp, FMF Pacific, and participated in the initial incursion into North China. He was a graduate engineer; a member of various engineering societies, and authored numerous technical articles. A profound love for his father prompted Charlie to follow his father’s and grandfather’s footsteps in the construction industry. It was this industry that brough him to Tyler in 1979. During the succeeding years, he was privileged to serve as construction manager of major additions and complete renovation of E.T.M.C.; construction of the E. TX Cancer Center; the creation of Lakeland Medical Center – Athens, TX, and various other ETMC Facilities in Texas. Also, Charlie served the Southside Bank by overseeing the building of numbers branch banks. Subsequent to retiring from the construction enterprises, he opted to become active in raising horses and cattle similar to what his kin did in Scotland. His grandson Cody was the motivation for this activity, which proved to be quite successful. However, Cody went to be with the Lord at an early age, prompted by the absence of his beloved grandson Cody, he terminated the livestock operation and applied much of his time to God’s work and woodcarving. Charlie was a former member of Green Acres Baptist Church and a current member of First Presbyterian Church; a member of Tyler Lodge #1233, Sharon Temple, Director of TASCA, active in various Scottish and livestock associations. He gave freely to Habitat for Humanity, Bethesda Clinic, and others. He was preceded in death by his parents, Charles L. and Elizabeth R. Aber; wife, Joyce Aber; a brother, Richard Donald Aber; and by his grandson, Cody Allen Grissom. He is survived by his late life love, Beverly Ohren of Tyler; His son, Rev. David R. Aber and wife Gwen of Huron, Ohio; daughters, Linda Aber of Albuquerque, New Mexico, Cynthia Gail Aber and Sandra Lee Aber both of Whitehouse; and by grandchildren, Dana and Drew Aber, Courtney Jennings, Tiffany and Paxton Cruz; and his loyal companion dogs, Baxter and Brittain. In lieu of flowers and in keeping with Charlie’s desire to help others, the family suggests memorials be made to First Presbyterian Church 230 W. Rusk St., Tyler, Texas 75701 or a charity of your choice.

&#8220;I have fought the good fight, I have finished the race, I have kept the faith.&#8221; A celebration of life for Charles Lewis Aber, 93, of Tyler, will be held Monday, December 21, 2020 at Whitehouse Cemetery with Dr. Stuart Baskin officiating... View Obituary & Service Information

The family of Charles Lewis Aber created this Life Tributes page to make it easy to share your memories.

“I have fought the good fight, I have finished the race, I have...

Send flowers to the Aber family.