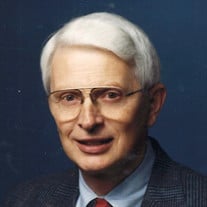 Dr. Charles Roger DeHaven went to be with his Lord on Thursday, October 17, 2019, after bravely struggling for years with Alzheimer's disease. He has lived in The Hamptons Memory Care for the past few years and passed away at the age of 87. He was a member of Grace Community Church. Roger came to accept Christ as his savior when he was gravely ill in medical school and fellow students were boundless in their devotion to him as they lead him to Christ. Roger was born September 24, 1932 in Benton Harbor, Michigan to Martha and Roy DeHaven. He is survived by his wife Lou Anne Scobey DeHaven. He married Lou Anne of Hastings, Michigan on December 27, 1953. They enjoyed a long and happy marriage and were able to stay together throughout the progression of his disease, thanks to the tireless efforts of his wife. After graduating medical school at the University of Michigan in 1957, Roger was drafted into the Army and served six years first in San Antonio, Texas and then in Fort Riley, Kansas. After leaving Fort Riley, he drove through Tyler and decided this was the town where he would reside. He commented many times during his last years that Tyler was the best place on earth to live. Roger moved to Tyler in 1964 working in private practice as an Ophthalmologist. Over the course of his career, he did over 23,000 cataract operations and was the first surgeon in East Texas to design and build a Medicare approved ambulatory surgical center and the 3rd in Texas to accomplish this. Of his many accomplishments, his involvement in the Lighthouse for Christ Eye Centre Mission in Kenya, East Africa was his most treasured. He was blessed to give light to both body and soul during his 15 trips to Africa. He knew that his employees over the years were the key to his success. Roger enjoyed life and had many interests and hobbies including golf, hunting, ballroom dancing and he was a private pilot. In spite of his busy life, he made time for his five children. He leaves behind Christine Johnson and her husband Faron, Kathleen Smith and her husband Alan, Thomas DeHaven and his wife Margaret, Ann DeHaven and James DeHaven all who still live in Tyler. His family grew over the years to include 11 grandchildren and 12 great grandchildren. He will be missed by all who knew him. A memorial service will be at 11:00 a.m. on Saturday, October 26, 2019, in the Stewart Family Funeral Home Chapel with visitation following the service. In lieu of flowers, please send donations to Alzheimer's Alliance of Smith County, 211 Winchester, Tyler, TX 75701 or The Lighthouse for Christ, P.O. Box 1858, Paris, TX 75461.

Dr. Charles Roger DeHaven went to be with his Lord on Thursday, October 17, 2019, after bravely struggling for years with Alzheimer's disease. He has lived in The Hamptons Memory Care for the past few years and passed away at the age of 87.... View Obituary & Service Information

The family of Charles Roger DeHaven, M.D. created this Life Tributes page to make it easy to share your memories.

Dr. Charles Roger DeHaven went to be with his Lord on Thursday,...

Send flowers to the DeHaven, family.