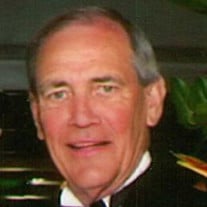 Charles “Chuck” Snodgrass, 79, of Holly Lake Ranch, Texas, passed away on Tuesday, October 15, 2019 in Tyler, Texas surrounded by his family. Charles was born February 3, 1940 to Clifford E. and Clyda Mae (Newlin) Snodgrass in Medicine Lodge, Kansas. Charles served in the U.S. military as a medic. He is the former Grand Knight of the Knights of Columbus and was voted by the Knights as the Man of the Year for 2019. Charles loved to spend time with his grandkids and enjoyed woodworking, traveling, hunting, and was an avid golfer. He also spent a lot of his time volunteering at the local food bank and serving at his church. Charles is survived by his beloved wife Mary Jane of 31 years, sons Troy (Amy) Snodgrass, Ross (Kelly) Webb, Nicholas (Stacie) Webb, daughters Niki (Mark) Rutledge and Kelley (Jean-Bernard) Webb-Lamour and many loving grandchildren and extended family. He was preceded in death by his parents and brother, Tom Snodgrass. Charles was a loving husband, father, grandfather, and friend to everyone. A Loving Farewell and Mass and Rosary will be held on Tuesday, October 22, 2019 at Holy Spirit Catholic Church 1612 S. FM 2869, Holly Lake Ranch, Texas 75765. The Knights of Columbus will lead the Rosary starting at 10:30 am and Mass will begin at 11:00 am. In lieu of flowers, memorial donations may be sent to the Knights of Columbus 1612 S. FM 2869, Holly Lake Ranch, Texas 75765.

The family of Charles Francis Snodgrass created this Life Tributes page to make it easy to share your memories.

Send flowers to the Snodgrass family.