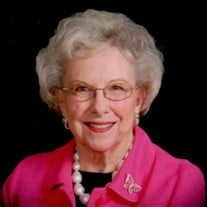 A celebration of life for Charlotte Clapp Halbert will be held in the sanctuary at First Christian Church on Saturday, August 1, 2020 at 10:00 a.m., with the reverend Dr. Chris Pulliam officiating. Visitation will be held at Stewart Family Funeral Home on Friday, July 31, from 5:00 -7:00 p.m. Charlotte passed from this life into eternity on July 19, 2020 in Tyler. Charlotte was born in El Dorado, Arkansas, on March 9, 1927, to Mabel and Arthur Clapp. Following the death of her mother, she and her sister, Natalie, lived with grandparents in Bernice, Louisiana. When their father remarried, to Gladys Harlow, she and Natalie moved to Longview and gained another sister, Nita. Charlotte graduated from Longview High School and Christian College in Columbia, Missouri, and attended Southern Methodist University, where she met her future husband, Henry “Hank” Bryant. She later married Jack Halbert, and they enjoyed over thirty years of life together. She was an active member of First Christian Church in Tyler since 1954, where she served on many committees and was an elder emeritus. Beginning work as an interior decorator with Pope and Turner in the late 1960’s, she later opened her own design studio, Charlotte’s Interiors, which continued until she was in her late 80’s. Charlotte was preceded in death by her parents, husband Jack, and a sister, Mary Vanita Avery. Survivors include her children and their spouses: Bob Bryant (Iris) of Santa Fe, New Mexico; Martha Swanson (Randy) of Hoffman Estates, Illinois; Linda Dorsey (Doyle) and Mary Burch (Henry) of Tyler, and a stepson; Kevin Halbert (Dona), of Tyler. She is also survived by three grandchildren, Raegan Muse (David) of Marietta, Georgia; Kendyl Rhone Zimmerman of Allen, Texas; and Kerry Halbert of Tyler; three great-grandsons, Dylan and Hudson Muse and Landon Zimmerman; her sister, Natalie Graves; as well as nieces and nephews. Grandchildren and great grandchildren by love also survive her. It is with much gratitude and appreciation that those who cared so faithfully for her the past few years are acknowledged: Caroll, Cynthia, Debbie, Diann, Elizabeth, Eva, Janie, LaSonya, Maxine, Selene, Shelia, and Yolunda. Social distancing will be observed, and masks will be available at both the visitation and the memorial. Additionally, the service will be livestreamed and available both in real time as well as later at https://youtu.be/NnE4V56340Q If desired, memorials may be made to First Christian Church of Tyler (Music Ministry Fund), 4202 S. Broadway, Tyler, TX 75701; The Hospice of East Texas Foundation, 4111 University Blvd., Tyler, TX 75701 or the charity of your choice.

A celebration of life for Charlotte Clapp Halbert will be held in the sanctuary at First Christian Church on Saturday, August 1, 2020 at 10:00 a.m., with the reverend Dr. Chris Pulliam officiating. Visitation will be held at Stewart Family... View Obituary & Service Information

The family of Charlotte Clapp Halbert created this Life Tributes page to make it easy to share your memories.

A celebration of life for Charlotte Clapp Halbert will be held...