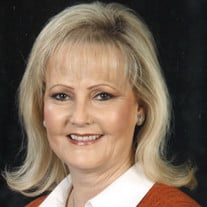 Christine Suzanne Moore, age 66, went to be with her Lord on November 5, 2019 at her home in Tyler. A celebration of Chris’ life will be held Saturday, November 9, 2019 at 2 p.m. at the Chapel of Green Acres Baptist Church with Daniel Allen and Boogie Wynne officiating. Burial will follow at Cathedral in the Pines under the direction of Stewart Family Funeral Home. Chris was born in Minneapolis, Minnesota on February 25, 1953, to Richard and Shirley Jones. She graduated from Richardson High School in 1971. Chris and her devoted late husband, Jerry were married June 28, 1974, having just celebrated 33 years of marriage the day he entered Hospice in 2007. Chris’ greatest joy was her family. Her life as a proud mother began March 19, 1978, with the birth of her daughter, Randee and the birth of her son, Jayme on November 16, 1981. Her life was made complete with the birth of her three precious granddaughters, Karlyee Christine, Emma Jerilynne, and Ella Catherine, who affectionately called her "Mimi Jo." She was also excitedly expecting her first great-grandchild, Rhyan Christine, in March 2020. Chris joined Brookshire Grocery Company in 1974, as an accounting clerk at the Tyler office and later served as an administrative assistant. She was promoted to oversee the Employee Profit Sharing program in 1993. She passionately served others and was an advocate for all Brookshire Partners. Anyone who knew Chris knew she loved Colorado and the abundance of rocks she would find there and even bring back with her. She loved watching her son coach John Tyler football with her daughter and granddaughters. She hardly ever missed a game. When she wasn’t attending Friday night lights you would find her at one of her granddaughters’ many, many events. Throughout her life, and especially during her husband’s long battle with cancer, her friends and family will always remember her for her strong faith and walk with the Lord, her positive attitude, and her source of strength and inspiration. Chris was preceded in death by her loving and devoted husband, Jerry; her parents, Richard and Shirley Jones; and her brother, Britt Jones. She leaves behind her treasured daughter and son-in-law, Randee and Randy Cheatham; a beloved son and girlfriend, Jayme Moore and Andrea Melontree; her precious granddaughters, Karlyee Moore-Slocum and husband Riley Slocum, Emma Cheatham, and Ella Cheatham; great-granddaughters, Evelynn Slocum and Rhyan Slocum; brother and sister-in-law, Matt and Pati Jones; brother-in-law and sister-in-law, Carl and Judy Moore; Paula Jones; nephew, Noel Moore and wife Joni; nephews, Jeremy Moore, Danny Moore, Brian Jones and Matt Jones; and nieces, Kim Reoh and Lyndsi Watson. Pallbearers are Matt Jones, Denis Knight, Noel Moore, Jeremy Moore, Daniel Moore, Brian Jones, and Blake Moore. Honorary pallbearers are Jerry Billups, Carl Moore, Mike Balfay, Dennis Taylor, and Stuart Sumrall. The family will receive friends from 6–8 p.m. Thursday, November 7, 2019, at Stewart Family Funeral Home 7525 Old Jacksonville Highway, Tyler, 75703.

Christine Suzanne Moore, age 66, went to be with her Lord on November 5, 2019 at her home in Tyler. A celebration of Chris&#8217; life will be held Saturday, November 9, 2019 at 2 p.m. at the Chapel of Green Acres Baptist Church with Daniel... View Obituary & Service Information

The family of Chris Moore created this Life Tributes page to make it easy to share your memories.

Christine Suzanne Moore, age 66, went to be with her Lord on...

Send flowers to the Moore family.