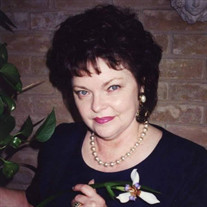 Clara Elizabeth Marshall “Boo” October 12, 1939 – June 19, 2022 A private family columbarium service for Clara Elizabeth Marshall, of Tyler will be held on Friday July 15, 2022 at Christ Episcopal Church with Reverend Ted Welty officiating. Following the columbarium service, a reception will be held for friends at 11:00 a.m. in the Parrish Hall. Boo was born October 12, 1939 in the Home for Protestant Babies in New Orleans, Louisiana. She was adopted, as an infant, by loving parents Dorothy and John Maxwell of Texarkana and an adoring older sister Jane Maxwell Atchley. Boo was always told “she completed their family”. She graduated in 1958 from Highland Park High School in Dallas and attended Centenary College of Louisiana in Shreveport, as an art major. She was a member of Zeta Tau Alpha sorority. Boo married James Bookout of Texarkana in 1959. They had two children, Karen and Doug. James later died in a car accident and the family moved to Dallas. Boo met Fred Marshall, a petroleum geologist, they married and Fred adopted Karen and Doug. They had a third child, Miles, and the family settled in Tyler. Boo was a member of Christ Episcopal Church. She co-owned Basket Case, selling gourmet foods and custom gift baskets. Later in life she searched for her biological parents and found her mother, Virginia Marguerite Hamby of LaFayette Georgia and siblings. This completed a desire to connect and bring a sense of closure and healing. Her journey compelled her to write a book “A Different Bus” chronicling her find. Boo had a passion for helping other adult children who had been adopted, as well as, biological parents looking for their children. She stated she had “the best of both worlds”. Boo was a wonderful mother, wife, homemaker, and a talented artist. She was preceded in death by her parents, sister, James Bookout, and by her husband, Fred Marshall. She is survived by her daughter, Karen Robinson and husband Ray of Tyler; her son, Doug Marshall and wife Lori of Dallas; her son, Miles Marshall of Las Vegas, Nevada; five grandchildren, Cameron Hart and wife Chelsea of Austin, Preston Hart and wife Brenna of Dallas, Katie Marshall of Dallas, Will Marshall of Dallas, and Jack Marshall of Las Vegas; and two great-grandchildren, Walker Hart of Austin, and Palmer Hart of Dallas. Our heartfelt thanks to the doctors, nurses and physical therapists at Christus Louis and Peaches Owen Heart Hospital and Tyler ContinueCare Hospital. We would also like to thank the amazing staff at Hospice of East Texas HomePlace. They allowed our Mother to leave this world with grace and dignity. In lieu of flowers, memorials may be made to Hospice of East Texas Foundation, 4111 University Blvd., Tyler, TX 75701 (www.hospiceofeasttexas.org) and the SPCA of Tyler, 3405 ENE Loop 323, Tyler, TX 75708 (https://spcaeasttx.com).

The family of Clara Elizabeth Marshall created this Life Tributes page to make it easy to share your memories.