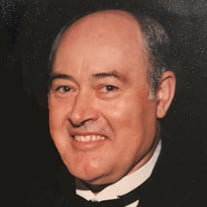 Claude Melvin Jenkins peacefully entered into the presence of his Lord and Savior on the 24th day of August, 2021. He was proceeded in death by his wife of 57 years, Darlene Mae (Speed) Jenkins. Mr. Jenkins was born in Brunswick, MO on June 30, 1937 to Marjory and Claude M Jenkins, Senior. Mr. Jenkins graduated from North East High School, Kansas City, MO in 1956 where he met the love of his life, “Dolly”, and started a cherished life with her. After becoming decorated with awards for his service to the United States Air Force (1956-1960) he and Darlene moved to Dallas, Texas in 1961. In 1971, they planted their roots in Tyler, Texas. They both went on to raise five children of their own, along with several neighborhood kids that found their way to their dinner table on Jan Avenue. Claude was a dedicated employee to the United States Postal Service where he retired after 32 years. Those that knew him saw him as a selfless, dedicated, hardworking man that never complained. Claude was a man that kept to his own and only gave his opinion when asked. Claude enjoyed teaching his kids to ride bikes, play sports, hunt, fish, and everything there was to know about playing pinochle. Claude received his doctorate in playing pinochle in 2011 from Pinochle State University, and was a master at helping decorate for the memorable Christmas Eve parties on Jan. His love for playing softball with his family led him to many national tournaments around the country. Claude taught the importance of family and being frugal. So frugal that drawers were full of extra condiments from restaurants and cabinets were full of extra soaps from hotels. He has been known to tell many that his greatest achievement in life was being promoted to “Pappaw”. His role as a grandfather was unparalleled. Claude made the effort to be in attendance to all soccer and baseball games, band concerts, shoots, and rodeos all across the states. If he was able to stop you long enough to talk, his stories usually reminisced on times of elk hunts, riding in a bomber plane, a recent achievement of a grandchild, his family trip to Alaska, or being a part of the pit crew for numerous NHRA drag racing divisional championships. Claude was always eager to help others and never expected anything in return. He showed integrity in everything he was a part of, spoke ill of no one, and had a contagious smile. Claude was given the nickname “Old School Google”, and had the ability to fix anything. He was a man that finished what he starts, except the kitchen remodel that he started 27 years ago for Dolly. Claude was not only the designated dog walker, but also a greeter, and steak runner for The Pharm Restaurant and Steakhouse. Claude had the tendency of letting his grandkids get away with more than he should have and tried to teach everything he knew. Stories of Claude could be written in volumes, but Claude would likely prefer that everyone remember him as a humble man who was fair, worked hard, and prided himself on loving his family. Claude’s presence and infamous chuckle will be deeply missed. In addition to his wife, Darlene (Speed) Jenkins, Claude was preceded in death by his mother, Marjory (Winfrey) Jenkins; Father, Claude M Jenkins, SR.; Brothers, Lorie Keith Jenkins and Danny Jenkins; Nephew, Kevin Jenkins; Brother-in-law, Zane Cole. Claude is survived by his loving family including brother, Carroll Jenkins and wife, Donna; sister-in-law, Charlene (Speed) Cole; his children, Greg Jenkins and his wife, Susan; Mike Jenkins; Jeff Jenkins and his wife, Kathy; Dana Parson and her husband, Greg; Jennifer Humphries and her husband, Brian; his grandchildren, Justin Jenkins and his wife, Carissa; Parker Jenkins and his fiancé, Sarah; Erika Kelley and her husband, Joshua; Kristin and Scott Parson; Chris and Hunter Jenkins; Heather Harcrow and her husband, Lee; and Trevor Humphries and his fiancé, Samantha; his great grandchildren, Emma and Andrew Kelley, Harper Jenkins, and Penelope Harcrow; nieces and nephews, Terry Cole, Lane Cole, Kevin Cole, Kyle Cole, and Terri Basinger. A visitation will be held from 5 o’clock to 7 o’clock in the evening of Sunday, the 29th of August, 2021 at the Stewart Family Funeral Home in Tyler, Texas. A graveside memorial service celebrating Claude’s life will be held at 10 o’clock in the morning of Monday, the 30th of August, 2021 at Rose Lawn Cemetery in Tyler, Texas. Pallbearers: Brian Humphries, Trevor Humphries, Hunter Jenkins, Justin Jenkins, Parker Jenkins, Greg Parson, Scott Parson, Danny Reeder, and David Smith. Honorary Pallbearers: Terry L Basinger, Kevin Cole, Kyle Cole, Lane Cole, Terry Cole, Chris Jenkins, and Denzil Mobbs. In lieu of flowers, memorial donations may be made to East Texas Food Bank, 3201 Robertson Rd., Tyler, Texas 75701 (www.easttexasfoodbank.org) or a charity of choice. A special thanks to the staff of The Hamptons Memory Care in Tyler, Texas and Oak Brook Health Care Center of Whitehouse, Texas.

Claude Melvin Jenkins peacefully entered into the presence of his Lord and Savior on the 24th day of August, 2021. He was proceeded in death by his wife of 57 years, Darlene Mae (Speed) Jenkins. Mr. Jenkins was born in Brunswick, MO on June... View Obituary & Service Information

The family of Claude Melvin Jenkins created this Life Tributes page to make it easy to share your memories.

Claude Melvin Jenkins peacefully entered into the presence of...

Send flowers to the Jenkins family.