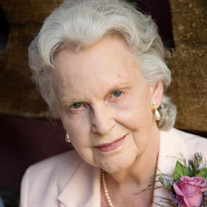 Memorial services for Coye Tillman McKinney, 99, of Tyler will be held on Saturday, March 12, 2022 at 11:00 a.m. at Glenwood Church of Christ with Stacy Peters officiating. A private burial was held at Rose Hill Cemetery in Tyler under the direction of Stewart Family Funeral Home. Mrs. McKinney passed away Saturday, January 8, 2022 in Tyler. She was born March 16, 1922 in Urbana, Arkansas to Charles Walter and Pearl Tucker Tillman. Coye was a member of the Glenwood Church of Christ in Tyler. She graduated from Lakeside High School in Lake Village, Arkansas in 1940. She subsequently attended Central Baptist College in Conway, AR., and Harding College in Searcy, AR. While attending college she met and married a young soldier named Ivan (Ike) McKinney before he shipped out to the European theater during WW11. Following the war they settled in Lake Village, AR and resided there until they both retired to Tyler in 1986. Coye was employed in the local draft office in Lake Village during the Vietnam war and later for the Farmers Home Administration until her retirement. Coye passed away on January 8, 2022, two months shy of her 100th birthday. Preceding her in death were her husband of 59 years, Ike, her parents CW and Pearl Tillman and her three brothers, Brooks, Ray and Charles Tillman. Coye is survived by her two children and their spouses, Ike and Betty McKinney of Tyler and Kathy and Stacy Peters of Little Rock, AR. Also surviving are her six grandchildren, Sarah (John) Siburt, Amanda (Geof) Vickers, John (Lindsay) McKinney, Katie (Aaron) Mitchell, Sam (Brooklynne) Peters, and Ike (Alexis) Peters. She also leaves behind 15 great-grandchildren, and three nieces and one nephew. If desired memorials may be sent to World Bible School, P.O. Box 2169, Cedar Park, TX 78630 or Children’s Homes, Inc., www.childrenshomes.org.

Memorial services for Coye Tillman McKinney, 99, of Tyler will be held on Saturday, March 12, 2022 at 11:00 a.m. at Glenwood Church of Christ with Stacy Peters officiating. A private burial was held at Rose Hill Cemetery in Tyler under the direction... View Obituary & Service Information

The family of Coye Tillman McKinney created this Life Tributes page to make it easy to share your memories.

Memorial services for Coye Tillman McKinney, 99, of Tyler will...

Send flowers to the McKinney family.