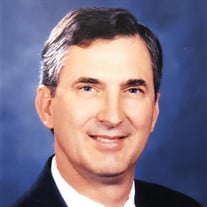 On Wednesday, September 30, 2020, Dale Edward Moran of Whitehouse, Texas took up residence in his heavenly home with his Savior, Jesus Christ. Dale was born on July 5, 1944 in Stewardson, Illinois, the second son of Kenneth and Cleo Moran.... View Obituary & Service Information

The family of Dale Edward Moran created this Life Tributes page to make it easy to share your memories.

Send flowers to the Moran family.