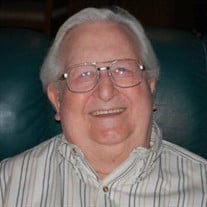 Services for Dale Edward White, 93, of Tyler will be held on Saturday, March 5, 2022 at 1:30 p.m. at Stewart Family Funeral Home with Rev. Burke Brack officiating. Visitation is scheduled for one hour prior to the service. Interment will be at Cathedral in the Pines under the direction of Stewart Family Funeral Home. Dale Edward White was born on August 21, 1928 in Stamps, Arkansas to John Lewis and Dimma Pearl White, and went to be with his Heavenly Father on February 27, 2022 in Tyler, Texas following a full life of 93 years. Dale was preceded in death by his son, Randy White, and his daughter, Laurie Osborne. He is survived by his wife of almost 70 years, Dorothy (Reynolds) White; two daughters, Donna Wood and Elizabeth Blaisdell; seven grandchildren, Melissa Hoisington (Seth), Matthew Wood (Jayme), Stephen Osborne (Jennifer), Lisa Medlock (Robert), Emily Vanwert (Ron), Will Waggoner, Bailey Waggoner (Alyssa); and ten great-grandchildren. Dale served in the Navy and met Dorothy Reynolds while stationed in Baltimore. Dale attended Harding College and then the University of Arkansas where he graduated with a degree in marketing. Dale was a natural salesman and still had customers staying in touch with him long after they did business together. One of Dale’s greatest joys was sharing his faith. Through the years, he taught Bible classes to all ages from high school through older adults. He spent many hours preparing his lessons and had a true love of the scriptures. Dale and Dot enjoyed entertaining, and their doors were always open to whomever dropped by. Dale was a perpetual optimist, fun to be around and a prolific storyteller. He made friends everywhere he went and cultivated those friendships through the decades. To know him was to love him. We will all miss his smile. In lieu of flowers, donations can be made to Harding University (www.harding.edu) 9165 E. Market Ave., Searcy, AR 72149.

Services for Dale Edward White, 93, of Tyler will be held on Saturday, March 5, 2022 at 1:30 p.m. at Stewart Family Funeral Home with Rev. Burke Brack officiating. Visitation is scheduled for one hour prior to the service. Interment will be... View Obituary & Service Information

The family of Dale Edward White created this Life Tributes page to make it easy to share your memories.

Services for Dale Edward White, 93, of Tyler will be held on...