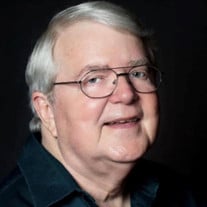 On September 5, 2020, Dan Stephen Trent got to meet his Savior, Jesus Christ after a four-week battle with Covid19. He was born December 5, 1946 in Grand Prairie, Texas to Elsie Dyer Trent and John E. Trent. A Celebration of Life service will be held on Saturday, November 14, 2020 at 10:00 a.m. at Colonial Hills Baptist Church on S. Broadway in Tyler, Texas. Social distancing and masks will be required. A private inurnment ceremony will be held at Rose Lawn Cemetery. Dan was a member of Colonial Hills Baptist Church and a member of the Silver Notes Choir. He graduated from the University of Texas at Arlington in 1969. There, he was a member ofTau Beta Pi National Engineering Honor Society and president of Eta Kappa Nu National Electrical Engineering Honor Society. Dan served in several organizations. He was an educator for the Alzheimer’s Alliance, a very active member of two Toastmasters groups in Tyler, and was president of Rose Toasters. Under his leadership, Rose Toasters obtained the President’s Distinguished Club Award. As a member of The Tyler Evening Toastmaster, he served as Vice President of Education and as secretary. He also served as the director of Area 14 District 50 of Toastmasters. Dan was an accomplished actor with multiple performances for the Tyler Civic Theater, where his last performance was that of Norman Thayor in “On Golden Pond.” He also performed at Henderson Civic Theater, which he helped establish, and Cherokee Civic Theater in Rusk. Dan had a history of varied and diverse careers in his life. When he passed, he was the Area Census Office Manager in Tyler. He actually retired from Nextar-KFXK/KETK TV as the chief engineer and Head of the Engineering Department. Prior to that, he was an Ambit energy consultant; technical director at Central Baptist Church of Jacksonville, TX; a census enumerator; director of engineering and maintenance at Laird Memorial Hospital in Kilgore, TX; design and sales engineer for King Tool Company of Longview, TX; and chief engineer for White Knight Broadcasting KFXK TV of Longview. For several years of his life, he pursued a prolific writing career, while living in Henderson, TX, and co-wrote, along with his wife Lynda Trent, 54 romance novels for Harlequin and Pinnacle. He wrote several soft horror novels for Zebra and Dorchester Publishing. He began his career working 17 years as an aerospace engineer for NASA at the Johnson Space Center in Houston. There, he worked behind the scenes on solving the problems of Apollo 13. This group of engineers were instrumental in developing the GFI electrical plug. He also worked on the Space Shuttle Program and ran many tests on equipment inside the zero-gravity airplane. Dan was preceded in death by his parents and older brother, John Trent. His brother and wife finished raising Dan after he was orphaned at the age of 17. He is survived by his loving family including his wife, Patricia Sullivan Trent of Tyler; son, Stephen Trent (age 50) of Muncie, Indiana; son, Vance Trent (age 48) of Pflugerville, TX; daughter, Donovan Rebecca Trent (age 21), who is a student at Northwestern Louisiana State in Natchitoches, LA; son, Dane Rex Everett Trent (age 16), a student at Jacksonville High School of Jacksonville; and stepson, Matt Gandy (age 48) of Tyler. Dan was very proud of his 8 grandchildren including: Erin Trent (age 30) of Pflugerville; Krista Trent (age 28) of Richmond, TX; Courtney Washington (age 25) of Leander, TX; Jackson Trent (age 21) of Flower Mound, TX; Aidan Trent (age 17) of Flower Mound; Kenna Gandy (age 16) of Tyler; Kara Gandy (age 11) of Tyler and Kylie Gandy (age 7) of Tyler. He is also survived by 2 great-grandsons, Jaden Andrews (age 10) of Pflugerville and Robbie West (age 1) of Richmond. Surviving former wives include: Henra Trent of Pflugerville, Lynda Trent of Henderson, and Minnette Bryant of Jacksonville. If desired, memorials may be made to the charity of your choice.

On September 5, 2020, Dan Stephen Trent got to meet his Savior, Jesus Christ after a four-week battle with Covid19. He was born December 5, 1946 in Grand Prairie, Texas to Elsie Dyer Trent and John E. Trent. A Celebration of Life service will... View Obituary & Service Information

The family of Dan Stephen Trent created this Life Tributes page to make it easy to share your memories.

Send flowers to the Trent family.