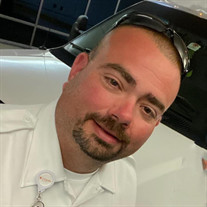 David Ray Eads, 42, went to be with the Lord Wednesday, November 17, 2021. He was a resident of Frankston, Texas and worked for UT Health Tyler EMS. David was a very loved and well-known man; he loved to help others and loved spending time with family and friends. David was in Emergency Services for 24 years. In high school, he started following in his father’s footsteps when he became a Texline Volunteer Firefighter. He then started his EMS career in Texline as an EMT and later went to work at Baptist St. Anthony’s in Amarillo. God then called David to Tule Creek EMS in Tulia, TX where he served the community for many years. He attended Amarillo College Fire Academy and graduated as a Certified Firefighter. He then took multiple jobs including Mental Health Tech and Emergency Room Tech at Northwest Texas Hospital and The Pavilion. He felt led back to EMS where he worked in Dimmit, Texas and volunteered for Silverton EMS. David and his family then moved to Memphis, Texas where he became a Nationally Registered Paramedic. David and his wife Vicky became foster parents and beloved community members. He began leading the community as the Administrator of Hall County EMS. David’s dream job and final calling was around the beautiful trees in East Texas where he worked as a Paramedic for UT Health EMS of Tyler near Frankston, TX where his wife Vicky and daughter Kayla now reside. David is survived by his parents, Ray & Sherri Eads of Canyon Tx; wife, Vicky of 14 years; and 5 children: James Tiffin & Sunny Ward of Heber Springs, Arkansas, Brittany & Payton Estes of Silverton, Texas, Heather & Nik Tarr of Meadow, Texas, Matthew Tiffin of Amarillo, Texas, and Kayla Eads of Frankston, Texas. He is also survived by sister, Melody & Ryan Laney of Claude, Texas; and brother, Mark & Lory Eads of Claude, Texas. David had 7 grandchildren: Abbigail, Braelyn, Stetson, Trenton, Avaleigh, Aizlynn, and Grace. In addition to numerous aunts, uncles, and cousins, David had 8 nieces and nephews: Natalie, Mason, Corra, Owen, Aleah, Amy, Alyssa, & Sarah.

David Ray Eads, 42, went to be with the Lord Wednesday, November 17, 2021. He was a resident of Frankston, Texas and worked for UT Health Tyler EMS. David was a very loved and well-known man; he loved to help others and loved spending time with... View Obituary & Service Information

The family of David Ray Eads created this Life Tributes page to make it easy to share your memories.

David Ray Eads, 42, went to be with the Lord Wednesday, November...

Send flowers to the Eads family.