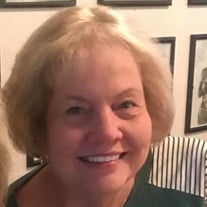 Mrs. Debra Lynn Ritchie went to her heavenly home on December 7, 2020 in Tyler. Services will be held on December 16, at 2:00 p.m. in the chapel of Stewart Family Funeral Home. Reverend Kim Beckham will be officiating with burial following in Whitehouse Cemetery. Debra was born on March 29, 1953, to Raymond J. and Patsy Simpson Clark. She was preceded in death by her parents and her son, Michael Ritchie who she missed every day. She is survived by her husband of 49 years, Jimmy Ritchie; two children, Christy Herring of Tyler and Bobby Smotherman and wife, Dana of Winona. She has two sisters, Mary Baldree and husband, Bill, of Tyler, Dana Nichols and husband, Alan, of Tyler; and one brother, Jeff Clark and Donna Tharpe of Whitehouse. Debra has six grandchildren that were the light of her life including Cayley Hendrick, Colton Hendrick, Chandler Herring, Mackenna Thorn, Lindsey Smotherman and Easton Smotherman. She also has one great-grandson, Cayson Moody. She is also survived by numerous nieces, nephews, cousins and friends and was “Momma Ritchie” to so many young adults. Debra was a member of Central Baptist Church in Tyler. She was a former member of Gateway Baptist Church in Whitehouse where she played the organ for many years. Christian music was one of her great loves. After attending beauty school upon graduation from Whitehouse High School, she decided to use her talents elsewhere and became an LVN. She was a long-time employee of Trinity Mother Frances where she worked in the nursery, labor and delivery and the Family Care Clinic. There she became known as “the baby whisperer” because babies seemed to be soothed when she held them. She retired from Family Care Clinic in 2015. People who knew Debra well speak of her generosity and encouragement. She helped many people over the years, especially those who had lost children. She was a great encouragement to parents after losing her own son. Serving as pallbearers are: Corey Shaw, Bobby Smotherman, Orry Jones, Bill Baldree, Chris McGill, Larry Wheeler, Johnny Vess, Joe Wynne and Alan Nichols. In lieu of flowers the family requests donations be made to Philadelphia Blessing Food Pantry in Whitehouse, Texas, c/o Tyler Metro Church, P.O. Box 131510, Tyler, Texas, 75713.

Mrs. Debra Lynn Ritchie went to her heavenly home on December 7, 2020 in Tyler. Services will be held on December 16, at 2:00 p.m. in the chapel of Stewart Family Funeral Home. Reverend Kim Beckham will be officiating with burial following... View Obituary & Service Information

The family of Debra Lynn Ritchie created this Life Tributes page to make it easy to share your memories.

Send flowers to the Ritchie family.