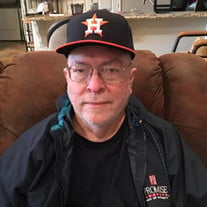 Services for Dewey P. Fuller, Jr., 76, of Bullard will be held on Friday, October 15, 2021 at 10:00 a.m. at First Baptist Church in Bullard with Pastor Scott Brown officiating and Pastor Doug Morris of The Branch Community Church assisting. The service will be under the direction of Stewart Family Funeral Home. Mr. Fuller passed away Wednesday, October 6, 2021 in Tyler, TX. He was born October 19, 1944 in Baytown, TX to Dewey Fuller Sr. and Cora Mott Fuller. Dewey Fuller Jr. married the love of his life on September 2, 1966. Margarie Fae Dossey spent 55 years of love and joy with that cute guy she first saw in the back row of Bible Class at Lee College Baytown, TX. Over the years they enjoyed everything together from their Christian faith to family and friends. Dewey was a member of First Baptist Church Bullard where he was a Deacon, member of the mowing crew and Overcomers Class. Dewey also served as Deacon, mowing crew, and cooking team with San Jacinto Baptist Church Baytown TX and First Baptist Church Baytown TX before relocating to Bullard TX. His faith led him to be a member of Promise Keepers and Builders for Christ where he helped build multiple churches throughout the United States. Dewey Fuller Jr. graduated from Stephen F. Austin State University with a Bachelors Degree and earned a Masters Degree from The University of Houston Clear Lake. Upon graduation from SFA Dewey took a job teaching with Conroe ISD for three years before moving to Goose Creek ISD to finish out his 34 years of teaching, coaching, and mentoring young men and women. While at GCISD, Dewey sponsored the largest Christian Student Union in Harris County. He also started the Liberty Tree History Club, coached football, basketball, and track & field. Students would love to hang out in his room during lunch and activity periods just to be around him. His sense of humor and infectious personality allowed him to reach kids and help them with life’s questions. Outside of the classroom Dewey was known as Coach Fuller on the diamond. His love for baseball prompted him to lead a team in the Baytown Little League East. The East League Giants, under his direction, won multiple League Championships, City Titles, and produced numerous All Star appearances in Region 14. The only team that compared to his love for those young men was the Houston Astros. If you saw Dewey out in public there was a good chance, he had on his Astros hat or an Astros shirt. Other hobbies Dewey Fuller Jr. loved were hunting and fishing. The enjoyment he had while spending time with his dad, sons, and grandsons out in nature was immense. Whether on a boat out in the bay, fishing off the bank at a pond or running trotlines on Lake Sam Rayburn, Dewey enjoyed the time spent talking about life and events. Dewey was preceded in death by his parents, Dewey Fuller Sr., Cora Mott Fuller; sister, Nancy Christine Fuller; sisters-in law and brothers-in-law, Don Hullum, Earl Dossey and Carolyn, and Dean Dossey and Della. He is survived by his loving family including wife, Margarie Fuller; sons and daughters-in-laws, Dan and Angie Fuller, John and Sarah Fuller; grandkids, Madison Kirkpatrick, Callie Coleman, Cammie Coleman, Cate Coleman, Jacob Fuller, Jonah Fuller, and Judson Fuller; his sister, Dewolyn Hullum; brother and sisters-in-law, George and Leatha Whitaker, Rita Reber, Altha Williamson, Truman and Martha Dossey, and Nelson and Jane Cox. Dewey also has numerous cousins, nieces and nephews who he cherished with all his love. Pallbearers for Dewey Fuller Jr. will be Scott Hullum, Dennis Hullum, Justin Stockwell, Jason Burgess, David Murray, and Josh Prewitt. Honorary Pallbearers are Jacob Fuller, Jonah Fuller, Judson Fuller, Truman Dossey, Nelson Cox, George Whitaker Jr., Richard Kimball, Paul Scivally, Bob Spradley, and the Overcomers Class First Baptist Church Bullard. Visitation is scheduled from 6:00 – 8:00 p.m. on Thursday, October 14, 2021 at Stewart Family Funeral Home, 7525 Old Jacksonville Highway in Tyler.

The family of Dewey Pinkney Fuller Jr. created this Life Tributes page to make it easy to share your memories.

Send flowers to the Fuller family.