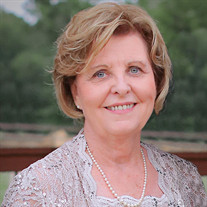 Memorial services for Dianna Sue Brown, 76, of Flint, Texas will be held on Sunday, January 5, 2020, at 3:00 p.m. at Rose Heights Church with Rev. Doug Anderson officiating. Mrs. Brown went to be with her Lord and Savior on Sunday, December 29, 2019, in Tyler, Texas. She was born December 13, 1943, in Union City, Indiana to Harold Dunham and Mildred Harter-Dunham. Dianna was a member of Rose Heights Church, where she attended faithfully every Sunday. She also enjoyed attending her Sunday School class, weekly ladies’ Bible study and quilting guild. She graduated from Mississinawa Valley High School in Union City, Ohio. She was the ultimate stay-at-home mom until she joined her husband Bill in his medical practice. Most recently, she loved working daily as the office manager for Brown Integrative, where she worked with her husband, Bill; son, Michael; and two granddaughters, Mikaela and Carley Goode. She loved to quilt and enjoyed spending time quilting with her girlfriends at quilting retreats. She was also a mentor to young girls at Bullard ISD. Dianna was passionate about family. She never missed a ballgame or performance involving her grandchildren. She adored her husband and enjoyed traveling the country with him whether by car, plane, helicopter, tandem bike, or motorcycle. She loved cooking with and for her family, even with Bill’s unique dietary preferences. Her most life changing event occurred in May 1975 at 6:00 p.m. when she and Bill dedicated their lives to Christ and were born again. This was the foundation and the rock on which their marriage was built and how their children were raised. Because of this life changing event, she became a powerful prayer warrior, praying for others without ceasing. She always had a Bible verse to share with those who were hurting. She was one of the most selfless people you ever met, always putting others before herself. She was a true believer and servant of Christ, showing Christ’s love to all she came in contact with. Dianna was preceded in death by her parents, Harold and Mildred Dunham; her brother, Duane Dunham; and sister, Phyllis Holsapple. She is survived by her loving family including her husband of 54 years, Bill Brown; daughter, Melinda Rook and husband Greg; daughter, Jennifer Freeman and husband Corey; daughter, Amanda Goode and husband Michael; and son, Michael Brown and wife Sharon. She was blessed with many precious grandchildren who were the joy of her life: Trevor Rook and wife Caitlin, Grant Rook, Megan and Tyler Meadows, Abby Freeman, Cody Goode and wife Dawn, Mikaela and Carley Goode, and Will and Sam Brown. She is also survived by her sisters, Josephine Michael, Charmaine Thornburg and Janet Dunham, as well as numerous nieces and nephews. In lieu of flowers, memorials may be made in Dianna Brown’s name to the Rose Heights Missions Program at Rose Heights Church, 2120 Old Omen Road, Tyler, Texas 75701 attention Bo Richardson.

Memorial services for Dianna Sue Brown, 76, of Flint, Texas will be held on Sunday, January 5, 2020, at 3:00 p.m. at Rose Heights Church with Rev. Doug Anderson officiating. Mrs. Brown went to be with her Lord and Savior on Sunday, December... View Obituary & Service Information

The family of Dianna Sue Brown created this Life Tributes page to make it easy to share your memories.

Memorial services for Dianna Sue Brown, 76, of Flint, Texas will...

Send flowers to the Brown family.