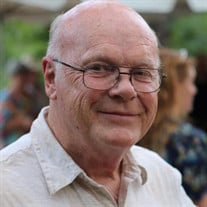 Don Lee Crozier of Tyler, TX passed away November 6, 2020 at the age of 80, joining his beloved wife Beverly in heaven less than 5 months after her homegoing. A graveside service to celebrate his life is scheduled for Friday, November 13th at 10:30 a.m. at Rose Lawn Cemetery with Rev. Phil Ketcham officiating. While Don and his family had hoped for more years together, he and his wife Beverly always trusted in the Lord’s timing, and now they are reunited. Born in Kansas City, Missouri, Don was adopted by Lance and Daisy Crozier and raised by Daisy, who instilled in Don a can-do attitude that served him well all his life. His favorite phrase was “onward and upward,” and he was constantly looking forward to the next project that he would tackle with gusto, from building a custom home to building a successful business. Don grew up in Kansas City and then got his Bachelor’s and Master’s degree in Petroleum Engineering from Tulsa University, accruing vast experience in the oil industry over the years with Clinton Oil, Amerada Hess, Koch, Enserch, American Petrofina, Delta Drilling, Neff, Crozier and Company, and finally Crozier and Company, Inc. In 1995 he ventured into a new career, founding Analytical Environmental Laboratories in Tyler. As the business took off, he and Beverly enjoyed working with both of their sons. More than anything, Don was devoted to his family. Don and Beverly met at Tulsa University, were married in 1961, and this past spring they celebrated their 59th wedding anniversary on June 3rd. Don was a talented cook and a collector of everything from G. Harvey prints to antique French clocks to vintage Volvos. He loved to watch his grandsons play sports, and he was a big Kansas City Chiefs and Mavericks fan. Later in life, Don and Beverly slowed down and enjoyed a few cruises. Don devoted the last four years to caring for Beverly as she battled mesothelioma. He was heartbroken at her passing, but he was determined to live on to continue working and vacationing with his grandchildren. Don is survived by his children, Brent Crozier and wife Ling of Tyler; Kent Crozier and wife Vicki of Tyler; and daughter Lori and husband Keith Boles of McGregor. He was Grandad to Callie Crozier, Levi, Luke, Elizabeth, and Lily Crozier, and Brett Boles and wife Shelby, Blake Boles, and Andrew Boles. He was preceded in death by his parents, Daisy Myrtle Kincheloe Lerdahl and Lance Lorraine Crozier and his wife Beverly Sue Wilson Crozier. In lieu of flowers, the family welcomes donations to EdenMission.net or give.Cru.org, the global component of Crusade for Christ.

Don Lee Crozier of Tyler, TX passed away November 6, 2020 at the age of 80, joining his beloved wife Beverly in heaven less than 5 months after her homegoing. A graveside service to celebrate his life is scheduled for Friday, November 13th... View Obituary & Service Information

The family of Don Lee Crozier created this Life Tributes page to make it easy to share your memories.