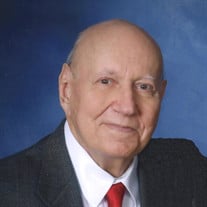 Services for Donald Lewis Mann, 87, of Tyler will be held on Saturday, January 16, 2021, at 10:00 a.m. at Stewart Family Funeral Home with Rev. Stephen Rhoads and Rev. Richard Luna officiating. Burial will follow at Rose Lawn Cemetery in Tyler under the direction of Stewart Family Funeral Home. The service will be live-streamed at https://www.stewartfamilyfuneral.com starting at 10:00 a.m. through the “Media” tab on Don Mann’s tribute page. Mr. Mann passed away Saturday, January 9, 2021 in Tyler, Texas. He was born August 12, 1933 in Greenville, Mississippi to Nehamah Reckless Mann and Ella Mae Johnson Mann. Don was the youngest of seven siblings, grew up in Greenville, MS and graduated from Greenville High School. He enlisted in the US Army and served in Korea as a radio operator during the Korean War. Upon his return, he married Sue Etheridge on April 2, 1955. He attended Delta State College (now University) in Cleveland, MS on the GI bill and graduated with a degree in accounting. With this degree he was able to achieve his goal of becoming a Special Agent for the Internal Revenue Service. He served in multiple areas of Mississippi before his retirement. Don and Sue moved to Tyler, TX in 1993 in order to be closer to their children and grandchildren. They loved Tyler and Texas. Sue died in 2012. Don married Martha Lehmann in 2013. Don was a life-long Methodist. He was a faithful member of Pollard UMC in Tyler and an active member and occasional teacher of the Builders Sunday School Class. He often rang a bell for the Salvation Army at Christmastime. Don was preceded in death by his parents, N.R and Ella Mann; his sisters, Essie Mann White, Opel Mann Graves, Elizabeth Mann Read, Ovella Mann Hester, Juanita Mann Holloway; his brother, Robert Mann; his wife, Sue Etheridge Mann. He is survived by his loving family including his wife, Martha Lehmann Mann; daughter, Martha Mann and “favorite son-in-law” Lee Wheeler; son, Frank Mann and wife Deborah Jolley Mann; grandchildren, Michael Mann and wife Brittany, Kathryn Mann and Austin Mann; great-grandsons, Bennett Mann and Ellis Mann. Due to his position as youngest sibling and his long life, Uncle Don attained the unexpected (to him) position of “Mann Family Patriarch” to many, many nieces, nephews and their families spread across the United States. He is also held in high regard by the Etheridge and Lehmann families. Pallbearers will be Frank Mann, Michael Mann, Austin Mann, Taylor Phillips, Walter Lehmann and Peter Lehmann. Honorary pallbearers will be The Builders Class of Pollard UMC. Visitation is scheduled one hour prior to service 9:00 – 10:00 a.m. on Saturday, January 16, 2021 at Stewart Family Funeral Home, 7525 Old Jacksonville Highway in Tyler. If desired, memorials may be made to The Salvation Army, 633 N. Broadway, Tyler, Texas 75702 or Pollard UMC, 3030 New Copeland Rd., Tyler, Texas 75701.

The family of Donald Lewis Mann created this Life Tributes page to make it easy to share your memories.

Services for Donald Lewis Mann, 87, of Tyler will be held on...

Send flowers to the Mann family.