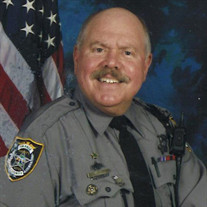 Memorial Services for Donald Randolph “Randy” Ward, 72, of Tyler, will be held on Tuesday, October 6, 2020, at 2:00 PM in the Stewart Family Funeral Home Chapel, 7525 Old Jacksonville Hwy, Tyler, TX 75703. Mr. Ward, a Christian, was born on May 21, 1948, in Orlando, FL. He passed away on Thursday, October 1, 2020, at home after a lengthy illness. Mr. Ward served in the US Navy from 1970 until 1976. He graduated from Florida Technological University (now UCF) in 1974. He was a real history buff which was complemented by his phenomenal memory. His attention to detail was matched only by his sense of humor. He had careers in both the insurance industry and law enforcement. He retired from the Orange County Florida Sheriff's Office Court Services in 2011. He and his wife Mary moved to Tyler in 2012. He was preceded in death by his father, Ferris Ward, mother, Eileen Ward and brother, Dee Ward. He is survived by his loving family, including wife and best friend, Mary Ward, brother and sister-in-law, Jim Lindsey (Linda), nephew, Bill Parker (Nita), Texarkana, great-nephew Will Parker, Mesquite, and best little companion, cocker spaniel, Oliver. In lieu of flowers, the family requests memorial contributions be made to St. Jude Children's Research Hospital, P. O. Box 50, Memphis, TN 38101-9929 or Tunnel Two Towers Foundation, 2361 Hyland Blvd., Staten Island, NY 10306-3100.

The family of Donald Randolph "Randy" Ward created this Life Tributes page to make it easy to share your memories.

Send flowers to the Ward family.