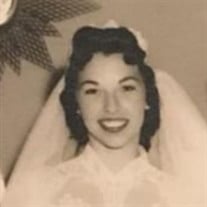 Dorothy Herrera Conklin joined her Lord and Savior on March 1, 2020, after a 25-year fight against Multiple Sclerosis. She was 84 years old. Dorothy was born to John C. and Lucille Herrera on March 19, 1937, in Laredo, Texas. After World War II, her family moved to Harlingen, Texas. Upon graduation from High School, Dorothy attended The University of Texas, graduating Cum Lade with a Degree in History in 1958. Dorothy had a love of history, which she got from her father. Dorothy intended to be a high school history teacher, but Love came into her life. Immediately after graduation, Dorothy married Frank M. Conklin, Jr., who she met at The University of Texas. Thus began Dorothy’s life as a Navy wife, and mother to two sons, Frank M. Conklin III and Robert K. Conklin. Dorothy and Frank traveled around the United States as Frank served his country. Frank retired from the Navy in 1976, and he and Dorothy moved to Austin, Texas. While in Austin, Dorothy was an elementary school teacher, working with third graders at the Eanes Independent School District. In 1993, Frank and Dorothy moved to Tyler, Texas, and because of their love of the city and its friendly people, they elected to stay after Frank’s retirement from the highway department. Dorothy’s final years were challenging as Multiple Sclerosis reduced her mobility. However, she was always the realist and made the best of things. Dorothy told family and friends that she enjoyed her life and was at peace. Dorothy was able to spend her last days at home, and that would not have been possible without the caregivers from Right At Home. Her family wants to especially acknowledge the kindness and care from Venessa Boulet and Jessica Lacy. Dorothy was preceded in death by her father, Col. John C. Herrera; mother, Lucille R. Herrera; son, Frank McClellan (“Lin”) Conklin III; husband, LCDR Frank McClellan Conklin Jr.; brother, John C. Herrera Jr.; and nephew, Paul Bronstein. Dorothy is survived by son, Robert K. Conklin; niece, Diane Halperin (Mark); niece, Susan Woodman (George); and many friends that she met throughout her wonderful life. Dorothy will be interred next to her husband and son at Fort Sam Houston National Cemetery in San Antonio, Texas. A funeral service will be held at the Pavilion at Fort Sam Houston National Cemetery at 10:30 a.m. on March 30, 2022. In lieu of flowers, please consider a donation to the Frank M. and Dorothy H. Conklin Endowment in Medical Ethics at The University of Texas at Austin (http://links.utexas.edu/cgcsrck) P.O. Box 7458, Austin, TX 78713 or to a charity of your choice.

Dorothy Herrera Conklin joined her Lord and Savior on March 1, 2020, after a 25-year fight against Multiple Sclerosis. She was 84 years old. Dorothy was born to John C. and Lucille Herrera on March 19, 1937, in Laredo, Texas. After World... View Obituary & Service Information

The family of Dorothy Conklin created this Life Tributes page to make it easy to share your memories.

Dorothy Herrera Conklin joined her Lord and Savior on March 1,...

Send flowers to the Conklin family.