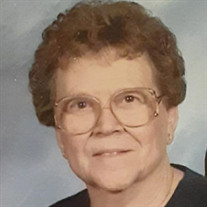 Services for Dorothy Hoffman, 86, of Bullard, will be held on Thursday, June 17, 2021, at 10:00 a.m. at Bullard Southern Baptist Church in Bullard with Brother Donnie Barron and Scott Parrish officiating. Burial will follow at Frankston City Cemetery in Frankston under the direction of Stewart Family Funeral Home. Mrs. Hoffman passed away peacefully with her family at home Sunday, June 13, 2021, in Bullard. She was born October 7, 1934, in Frankston to Milam Henry and Sallie Perry Hollis. She was married in Frankston to Bobby W. Hoffman on May 31, 1957, at Frankston Baptist Church. Dorothy was a charter member and founder of Bullard Southern Baptist Church. She graduated in the 1950s from East Texas Baptist University with a degree in music and later in life achieved her education degree at the University of Texas at Tyler for early childhood education. She retired as a Pre-K teacher in Jacksonville in the late 1990s. Since her retirement she had been active in her community, teaching Sunday school, and singing in the choir at her church. Dorothy was preceded in death by her mother and father, Milam Henry and Sallie Perry Hollis; spouse, Bobby W. Hoffman; and sister, Winifred Owen. She is survived by her loving family including daughters and spouses, Susan and Rusty Phillips and Sarah and Rodger Hoffman; grandchildren and spouses, Paige Phillips and Tyson Uhlig, Blake and Randi Phillips, Rustin and Samantha Phillips, Slade and Jessica Frazier, Joeley Marie and Casey Askew; great-grandchildren, Cason Phillips, Riley Phillips, Jordyn Phillips, Alex Ramos, Laden Askew, Aubrey Askew, Serenity Frazier, Elizabeth Frazier, Arya Frazier, and one more Phillips on the way; sisters–in–law, Gwen and Peggy Hoffman; and many nieces and nephews. Pallbearers will be Blake Phillips, Rustin Phillips, Tyson Uhlig, Slade Frazier, Casey Askew, and Cason Phillips. Visitation is scheduled from 6:00 - 8:00 p.m. on Wednesday, June 16, 2021, at Stewart Family Funeral Home, 7525 Old Jacksonville Highway, in Tyler. If desired, memorials may be made to Bullard Southern Baptist Church, 716 N. Houston St., Bullard, TX 75757 (www.bullardsouthern.com/giving).

Services for Dorothy Hoffman, 86, of Bullard, will be held on Thursday, June 17, 2021, at 10:00 a.m. at Bullard Southern Baptist Church in Bullard with Brother Donnie Barron and Scott Parrish officiating. Burial will follow at Frankston City... View Obituary & Service Information

The family of Dorothy Hoffman created this Life Tributes page to make it easy to share your memories.

Services for Dorothy Hoffman, 86, of Bullard, will be held on...

Send flowers to the Hoffman family.