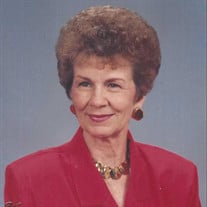 Dorothy “Penny” Rogers, beloved wife, mother, grandmother and great-grandmother, left for heaven Sunday, September 6th. She was born June 29, 1923 to Charles and Nora VanNorman of El Paso, TX. She is survived by her husband of 66 years, Percy Rogers and their children and spouses: Charles and Evelyn Hooker, James and Christina Hooker and Donna and Paul Christman. Her grandchildren and spouses: Roger Hooker, Steven and Mandy Hooker, Cade and Cathy Hooker, Devin Hooker, Cami and Austin Ryan and Cari and Chris Ott. Her great- grandchildren, Jordan Shaw, Finley Ryan, Aiden Ott, Nolan Hooker and Torin Hooker. Penny and Percy moved to Hobbs, New Mexico after marrying in 1954. They spent 26 years in Hobbs, where Percy owned and operated Lea Drugs as a pharmacist. Penny worked 14 years as a medical assistant for Dr. Hal Fenner, an orthopedic surgeon. They were members of First Baptist Church for many years, where Penny taught Sunday School classes from 1st grade through High School. They retired and relocated to Marble Falls, TX in 1980 where they joined First Baptist Church. While there, they participated in the adult choir and served as volunteers for the youth group. Penny also taught a senior ladies’ Bible study. Percy and Penny moved to Tyler, TX in 1999 and became members of Colonial Hills Baptist Church. She had many interests. She had a great love for all of God’s creatures. Over the years, many dogs, cats, and miscellaneous animals were a part of the family. She also had an affinity with birds of all kinds. It was not unusual to see her nurse many back to health, whether it was a broken wing or a myriad of other problems; they usually did not want to return to the wild after her nurturing love. She would release them, but they often returned. Penny’s love and care for the neighbors’ children was well known too. Before going to a doctor, friends would bring their kids to “Miss Penny,” to see if she could fix the problem first. She often did just that! Though she had no formal education as a nurse, she was naturally gifted as one. Another love of Penny’s, was her plants and flowers. She could grow absolutely anything from nothing. Once from an overseas trip, she carried an inch of a plant all the way back home, planted and cared for it, and it grew into a twenty-foot tree. And while living in New Mexico, she was known for growing prize-winning roses. Another hidden talent was Penny’s knack at finding a bargain on clothing and decorative items. No one could push through a Goodwill store with more vigor, energy and excitement! For years, women of all ages, and an occasional brave man, would stop her while shopping to complement her sense of style and poise. Her age was always a fun fact to share with others-as no one would believe her actual age! She was often the “go to” costumer for church pageants, last minute costume parties, and special occasions-supplying all the jewelry, clothing and props right out of her own closet. She greatly loved and nurtured all of God’s creation, and especially the people that had the opportunity to know her. In lieu of flowers, donations may be made to The Hospice of East Texas Foundation, 4110 University Blvd., Tyler, TX 75701, who provided loving care during Penny’s illness.

Dorothy &#8220;Penny&#8221; Rogers, beloved wife, mother, grandmother and great-grandmother, left for heaven Sunday, September 6th. She was born June 29, 1923 to Charles and Nora VanNorman of El Paso, TX. She is survived by her husband of 66... View Obituary & Service Information

The family of Dorothy "Penny" Rogers created this Life Tributes page to make it easy to share your memories.

Send flowers to the Rogers family.