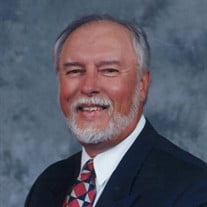 Doug Malone, beloved husband, stepfather and Papaw went to be with his Lord on Friday, March 12, 2021 in Tyler. Services for Mr. Malone will be held at 2:00 PM, Wednesday, March 17, 2021, at Stewart Family Funeral Home, with Pastor Ken Brumley officiating. Family will receive visitors beforehand from 12:30 to 2:00 PM, with burial at Cathedral of the Pines Cemetery in Tyler to follow the service. Born in Oak Cliff, Texas, on January 21, 1942, Doug was the only son of Lester D. Malone and Edna L. Malone. He graduated from Sunset High School in 1960 and attended Navarro Junior College on a baseball scholarship. Douglas enlisted as a member of the Navy Reserve in 1962 and trained at the Naval Air Station in Dallas. Later, Doug began his career in computer programming, specializing in working with the banking industry, and became Vice President of First National Bank in Garland. Doug moved to Tyler and began working for Electronic Data Systems, officing in Jacksonville, Texas. He retired from EDS in 1998 as a Systems Analyst and Network Engineer. Douglas married the love of his life, Becky Malone, in 1995 and became stepfather to Jeremy Stroud. He loved Jeremy as his own, and became a proud Papaw in 2011 to his granddaughter, Savannah Stroud. Doug and Becky lived at Cumberland Ridge at Lake Palestine for 23 years until recently moving to Chandler, TX. He was a member of Green Acres Baptist Church, where he and Becky first met. Doug was an avid golfer, hunter and fisherman, and enjoyed these activities fully during his retirement. He was a member of the “Noon Golf Group” at Eagles Bluff Country Club for over 20 years, scoring two “holes in one” and shooting his age at 69, 72 and 74. Doug cherished his friendships with the “Bison Brothers”, a group of friends who have known each other for over 60 years, and still gather annually at “Fort Kibler” in West Texas. Doug is survived by his loving family including Becky Breen Malone, his wife of 26 years, stepson, Jeremy Stroud and wife Latricia, and granddaughter, Savannah Stroud. Also, brother-in-law, Timothy Breen and wife Tammy, and sister-in-law, Linda Henderson. Survivors also include a host of loved nieces and nephews. Doug was predeceased by his parents, L.D. Malone and Edna Malone. Pallbearers will be Will Hutchins, Chase Weatherly, Gabriel Breen, Wayne Kerr, Jackson Kerr and Clint Neely. Honorary pallbearers will be the “Bison Brothers”. The family wishes to thank the dedicated staff at Christus Mother Frances Hospital, ContinueCare Hospital at Mother Frances Hospital and Hospice of East Texas. In lieu of flowers, memorials can be made to Hospice of East Texas, 4111 University Blvd., Tyler, TX 75701.

Doug Malone, beloved husband, stepfather and Papaw went to be with his Lord on Friday, March 12, 2021 in Tyler. Services for Mr. Malone will be held at 2:00 PM, Wednesday, March 17, 2021, at Stewart Family Funeral Home, with Pastor Ken Brumley... View Obituary & Service Information

The family of Douglas Malone created this Life Tributes page to make it easy to share your memories.

Doug Malone, beloved husband, stepfather and Papaw went to be...

Send flowers to the Malone family.