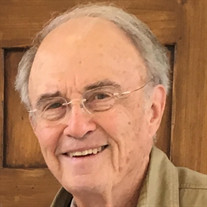 Memorial services for Dr. Glen Colle Dyer, 88, of Tyler will be held on Sunday, January 16, 2022 at 3:00 p.m. at Stewart Family Funeral Home with Rev. M.L. Agnew officiating under the direction of Stewart Family Funeral Home. Dr. Dyer passed away Wednesday, January 12, 2021 in Tyler. He was born December 18, 1933 in Sinton to Terry Owen Dyer and Pearl Emma Colle Dyer. Glen was raised in Sinton where he lettered in football and basketball for the Pirates. He attended college at UT Austin where he served in the ROTC and played quarterback for the Longhorns. While at Texas, Glen married the love of his life, Sue McMacken, also of Sinton. They kicked off their wonderful 68 years of marriage living in married student housing in Austin. Glen was drafted by the 49ers, but forewent a football career to attend the Texas Dental School in Houston. He later served as a Captain in the Army while head of the dental clinic in Ft. Sill, Oklahoma. The Dyers moved to Tyler in 1963 where he started his dental practice that served the community for over 30 years. Dr. Dyer was most concerned with his patients care and would trade dental work for things like pottery or food for those who couldn’t afford to pay. When Dr. Dyer closed his practice, he held the post of dental clinic supervisor at Tyler Junior College for close to 20 years, where he mentored countless numbers of students entering the profession. The Dyers were members of Christ Episcopal church in Tyler. Glen was a coach and teacher at heart who never missed a performance or game of his children or grandchildren. He loved animals and the outdoors and would often feed mule deer from his bare hands at his home in Angel Fire, NM. There was never a project that Dr. Dyer couldn’t handle and he routinely cut down trees into his late 80’s. He was known to his eight grandchildren and five great-grandchildren as Papa. His giant smile and constant encouragement were trademarks of his gentle and caring personality. Glen was preceded in death by his parents, his brother Terry Dyer and his son Clay Richard Dyer. He is survived by his loving family including his wife Sue; his daughter Beth Guinn and husband Andy of Tyler; his son Jim Dyer and wife Diana of Madison Virginia. He is survived by his grandchildren, Andrew Guinn and wife Kendall; Daniel Guinn and wife McCall; Grace Young and husband Taylor; Madison Dyer, McCain Dyer, Mason Dyer, Mitchell Dyer and Mollie Kate Dyer. He is also survived by his great grandchildren, Dash Guinn, Eloise Guinn Annabelle Guinn, Callahan Guinn and Jack Young. Visitation is scheduled from 2:00 – 3:00 p.m. on Sunday, January 16, 2022 at Stewart Family Funeral Home, 7525 Old Jacksonville Highway in Tyler. If desired, memorials may be made to Christ Episcopal Church (www.christchurchtyler.org) or the T.J.C. Dr. Glen Dyer Dental Hygiene Excellence Award Endowment.

The family of Dr. Glen C. Dyer created this Life Tributes page to make it easy to share your memories.

Memorial services for Dr. Glen Colle Dyer, 88, of Tyler will...

Send flowers to the Dyer family.